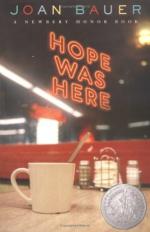 This detailed literature summary also contains Topics for Discussion and a Free Quiz on Hope Was Here by Joan Bauer.

Hope Was Here by Joan Bauer is the story of Hope Yancy, a sixteen-year-old girl who is being raised by her aunt Addie. When she was born, she only weighed a little over two pounds, and the doctors didn't have much hope that she would survive. But she had an inner strength that stayed with her throughout her young life. Hope's mother, Deena, had named her Tulip, a name which Hope hated and later had legally changed to Hope—because hope is a good thing to have. Deena was not equipped to raise a child—she was too caught up in her own life and her string of lovers. Deena "gave" Hope to Addie to raise.

Addie had been married and had wanted children but suffered three miscarriages and her husband left her for another woman. Deena claimed that she didn't know who Hope's father was but Hope didn't believe her. Hope held on to the dream that her father was searching for her and that someday they would reunite. In fact, she kept a "Dads" scrapbook with pictures from magazines of men who looked like good "dad" candidates. She kept another scrapbook of the history of her life so that when her father found her she could catch him up on her life.

Addie was a great restaurant cook but didn't have good luck in choosing the best restaurants to work for. They'd often go out of business or close for some other reason. For that reason, Addie and Hope moved around a lot. In fact, they moved so much from city to city and state to state that Hope went to six different schools in five years. As the story begins, Addie and Hope are leaving New York City where Addie was the head cook and Hope was a waitress at a restaurant they both loved. The manager, however, stole all the restaurant's money and took off. The restaurant closed down and Addie accepted an opening as head cook in a diner in Mulhoney, Wisconsin. Hope was less than thrilled. She had to leave her friends and leave the Big Apple for a dinky town in Wisconsin. On top of that, the guy that owned the diner was dying of leukemia.

When they arrived, they met the diner staff and G. T. Stoop, the owner. G. T. was one of the happiest and kindest people that Hope had ever met. She expected to meet someone who was depressed and on his last leg, but she was pleasantly surprised. G. T. didn't like the corruption that was going on in his small town, and wanting to make every minute he had left count, announced that he was running for mayor, challenging the corrupt man who had held the position for eight years.

The supporters of Mayor Millstone tried every dirty trick in the book to sabotage G. T.'s campaign but they could not deter his spirit and that of his loyal supporters, including Hope and Addie. A romance developed between Addie and G. T., and after he was elected mayor, they married. Hope finally found her father when G. T. expressed his intention to adopt her. She would be his only child and, in her heart, her only father. She had been waiting for him all her life. Hope also found her real home, a boyfriend, and did well enough in her new high school to be accepted at a university.