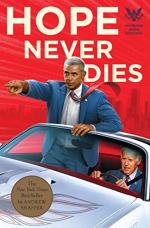 The following version of this book was used to create this study guide: Shaffer, Andrew. Hope Never Dies. Quirk Books, Philadelphia PA. 2018. First Edition. The novel is written in the fictionalized voice of first-person narrator and former Vice President of the United States, Joe Biden, and is set a few months after the end of Biden’s time in that position.

The novel begins with Joe feeling restless, uncertain, and old – restless because he does not really have anything to do, now that he is no longer vice-president; uncertain about both himself and his friendship with Barack Obama, which seems to have come to an end; and old, with aches and pains that are getting in the way of his being as active as he would like. Into this general feeling of malaise comes Obama (whom Joe refers to as Barack), with news that one of Joe’s friendly acquaintances, a train conductor named Finn Donnelly, has been found dead under suspicious circumstances. The men agree that it would be best to keep Joe’s relationship with Finn a secret, given the extra strain that publicizing the relationship would cause. Shortly afterwards, Barack again disappears from Joe’s life.

Joe, concerned about what happened to Finn and curious about some of the more unusual elements of the case (including a map with his address found on Finn’s body), meets with another friend, police officer Dan Capriotti, who tells him that Finn was found with a bag of high-grade heroin on his body. Joe is confused, since he knows that Finn never touched alcohol, let alone drugs. His curiosity leads him to begin an investigation of his own, that leads him into encounters with a fake minister, a couple of Finn’s former colleagues on the trains, and again with Barack who, along with Secret Service agent Steve, helps Joe in his investigation.

As part of his investigations into Finn’s activities during the last days of his life, Joe leads Barack and Steve to a motel where Finn had been living before his death, and to Finn’s car. Each visit provides him with a new piece of evidence – a piece of missing carpet, a floor that seems to have bloodstains washed off of it, and garbage that leads to Finn’s favorite restaurant. There Joe and his allies uncover another piece of information – that Finn was seen carrying a black duffel bag into the restaurant, a bag that was not found when he was killed.

Meanwhile, Joe finds himself increasingly resentful of Barack’s return to his life after what has seemed like a long absence. In spite of having fallen back into what seems to have been their habitual, sometimes pointed banter, Joe feels their relationship has changed irretrievably, and tries to figure what had happened to make such a difference. At one point, he tells Barack to leave both him and the investigation alone, but the two men are soon back together, continuing to follow evidence and information that leads Joe to increasingly uncomfortable truths about Finn, a man he once thought of as a good friend.

Eventually, a letter from Finn to Joe, written before Finn’s death, provides key information that answers several of Joe’s questions – Finn had been running drugs for a local biker gang, but had decided he had had enough, even though it probably meant losing his life. The letter also leads Joe to the location of the long-sought duffel bag, and the discovery that it contains heroin of the grade found on Finn’s body. While taking the duffel bag on the train with him to the police, Joe encounters Capriotti, who reveals that he has been protecting the biker gang from police investigation, and that he was directly involved in Finn’s death. A confrontation between Joe and Capriotti on the train ends with Capriotti jumping off and eventually being killed.

The train is met by Barack and Steve, who help Joe escape the scene without being noticed by the press or the police. Shortly afterwards, Joe and Barack patch up their friendship, and the novel ends with Joe on a train, going in to Washington to play golf with the former president.