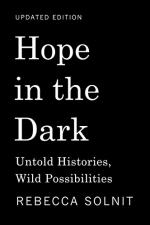 Related Topics
Men Explain Things To Me
The Mother of All Questions
Recollections of My Nonexistence: A Memoir
A Paradise Built in Hell

Rebecca Solnit
This Study Guide consists of approximately 33 pages of chapter summaries, quotes, character analysis, themes, and more - everything you need to sharpen your knowledge of Hope in the Dark.

The following edition of this book was used to create this guide: Hope in the Dark: Untold Histories, Wild Possibilities. Haymarket Books, 2016.

Solnit begins her collection by reflecting on a quote from Virignia Woolf’s journal in which she asserts that, “the future is dark, which is on the whole, the best thing the future can be, I think” (1). This quote becomes the basis of examination for the entire collection as Solnit explores what Woolf could have meant writing during the bleak time of the First World War. Solnit emphasizes early on that her book strives to reinstate hope as a guiding and active force for activists in pursuit of social and political change.

The first part of Hope in the Dark is largely a recapitulation of the current state of American and global affairs, with the emphasis placed on the start of the Iraq War and the reelection of George W. Bush to office. Solnit delineates when activists “lost” the fight against the Iraq War before explaining what they “won” and what their fervent opposition to the war achieved despite the government’s decision to proceed with it. She then goes on to differentiate between two kinds of emotions – false hope and easy despair – both of which she has experienced and observed, but neither of which she advocates for as a productive means of existing in the increasingly global world. Finally, she asserts that it is the untold stories that matter most for cultivating hope in the face of despair, and informs the reader that she will be focusing on the “marginal zones” of social change in order to combat the narrative that activism as a whole has been defeated.

The next section of the book redefines what Solnit considers the arrival of the Millennium and chronicles a series of five events that provide arguments to the assertion that activism has failed: the fall of the Berlin Wall in 1989, the 1994 uprising in southern Mexico by indigenous “Zapatistas” fighting the spread of capitalism, protests against the World Trade Organization in Seattle in 1999, the aftermath of the terror attack on September 11, 2001, and the widespread march against the War in Iraq in February of 2003.

Solnit then uses these events, people, places, and ideology to reflect on the process of change, trying to uncover where “change” begins and how it spreads. She addresses ideas like the imagination, collective spirit, historical precedent, and the efficacy of writing during times of political turmoil to advocate for how activists should continue to work toward a better world. In so doing, she addresses the aspects of activism that must be dispelled, namely the assumption that perfection is possible and anything less than perfection is a failure, thinking in binary terms, categorizing every movement as part of a particular ideology, the privileging of the global over the local, and the predominant focus on the political before the cultural.

Solnit then turns to her own city in her own country, examining the diversity and beauty of San Francisco alongside the United States as “the rotting center of a flourishing world” (108), ultimately arguing that by paying more attention to details and activism in the local sphere, that “rotting center” can produce new, surprising fruit.

The last section of the book feature three chapters added after the original publication in 2004. These chapters focus on phenomena – both devastating and hopeful – since the early days of the Bush Administration, including Hurricane Katrina, a more in-depth meditation on 9/11, and a catalogue of the strides that have been made by environmental activists in the last decade. The afterward of the book asserts that the collection was written for anyone “overwhelmed by the defeatist perspective” (142), and ends on a note of hope for the work that can be done in the future.

More summaries and resources for teaching or studying Hope in the Dark: Untold Histories, Wild Possibilities.