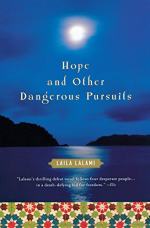 Related Topics
The Moor's Account
The Other Americans
Conditional Citizens

Laila Lalami
This Study Guide consists of approximately 29 pages of chapter summaries, quotes, character analysis, themes, and more - everything you need to sharpen your knowledge of Hope and Other Dangerous Pursuits.

Hope and Other Dangerous Pursuits Summary & Study Guide includes comprehensive information and analysis to help you understand the book. This study guide contains the following sections:

This detailed literature summary also contains Quotes and a Free Quiz on Hope and Other Dangerous Pursuits by Laila Lalami.

The following version of this book was used to create the guide: Lalami, Laila. Hope and Other Dangerous Pursuits. Algonquin Books, 2006.

Murad dreams of crossing the short stretch between Morocco and Spain in order to search for a lucrative job and provide for his family. He encounters the novel's other characters on the boat when they are forced to get out and swim the remainder of the distance. They make it across before being caught by the Spanish immigration forces.

Larbi works at the Moroccan Ministry of Education and struggles to deal with his daughter, Noura's, friendship with a more religiously-minded girl, Faten. Noura refuses to apply to colleges in the United States after Faten's influence. Larbi attempts to get to know Faten more closely in order to understand Noura, but her willingness to speak about politics unnerves him.

Halima seeks comfort from her mother after her husband, Maati, beats her again. Her mother urges her to be patient and try new methods of handling Maati, but Halima is nearly fed up. The next day, however, Maati agrees to stop drinking and Halima allows herself to hope a little bit that her life is about to change. When Maati beats her again, Halima makes up her mind to file divorce papers. She is also motivated to begin thinking of how she can emigrate to Spain.

Aziz spends the week saying goodbye to his family and wife before he embarks on his journey to Spain. Aziz is tired of working odd-jobs and subsisting in Morocco, and believes he will succeed elsewhere.

Murad remembers how he used to work as a tourist guide in Tangier where he struggled to find paying customers. He begins to resent the higher positions in the family that his younger siblings have. His weariness with the lack of job prospects available to him tempts him to emigrate.

Halima has been deported back to Morocco and lives with her three children in the city while she works by day at the market. Maati grants her the divorce, and she feels truly hopeful that she will be able to begin anew and recreate herself. She thinks constantly about how much she loves her children.

Faten emigrates to Madrid where she works as a prostitute. She feels strongly for one of her clients who assures her that he wants to help her become a legal citizen and stop prostituting herself. The client still has sex with her, disappointing her and making her lose hope.

Aziz returns to Morocco for the first time in five years, mildly disappointed that he has not made as much money as he had hoped to in order to help his family. He struggles to reconnect with his wife, Zohra, and does not know how to feel because he wants to return to Spain alone.

Murad is also back living in Tangier at the gift shop. He finds pride in his sales ability, and he sells an expensive rug to female travelers. He resolves to begin writing his own stories and dreams of the possibilities of his life.

More summaries and resources for teaching or studying Hope and Other Dangerous Pursuits.

Hope and Other Dangerous Pursuits from BookRags. (c)2022 BookRags, Inc. All rights reserved.