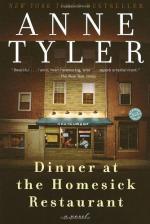 Dinner at the Homesick Restaurant Summary & Study Guide includes comprehensive information and analysis to help you understand the book. This study guide contains the following sections:

This detailed literature summary also contains Topics for Discussion on Dinner at the Homesick Restaurant by Anne Tyler.

Dinner at the Homesick Restaurant is an American novel by Anne Tyler, published in 1982. It was a finalist in 1983 for both the Pulitzer Prize and the PEN/Faulkner Award.

The novel tells the story of the Tull family over forty years, and their attempts to deal with the aftermath of their abandonment by Beck Tull. The story begins at 85-year-old Pearl Tull’s deathbed, and then rotates from her point of view to that of each of her children, chapter by chapter, ending with her funeral. As each character reveals their memories of many of the same events, the reader gets differing perspectives and understanding of the psychological and emotional consequences of family dysfunction and the impact of memories.

Pearl Tull is a hard-working, emotionally distant woman who has been left abruptly by her husband Beck Tull to raise her three children alone. She is now blind and remembering her life. When she meets Beck, she is thirty years old and well on her way to being an old maid. Beck is 24 years old and a slick, handsome salesman who sweeps her off her feet. Because of his job, Beck moves Pearl and their family often, and as a result they lose contact with extended family and never develop contacts in the places they live.

Pearl and Beck have three children: Cody, Ezra and Jenny. When the children are ages 14, 11 and 9, Beck suddenly abandons the family, moving on to the next job without them, while they remain in Baltimore, Maryland. Pearl never explains Beck’s absence to anyone, including the children, except to say he is away on business. She then gets a job and struggles to raise her children, often becoming both physically and verbally abusive to them.

As the point of view changes from character to character, the reader gets a picture of a family in crisis, never feeling their family is normal or connected. Cody is the most affected by his father’s abandonment, and becomes an angry youth, obsessively jealous of his younger brother Ezra. Ezra is a softer-hearted boy who takes pleasure in playing music on his wooden recorder, and takes the role of the family healer through his interest in cooking. Jenny is a frequent victim of her mother’s abuse, apparently because she is not fulfilling her mother’s need for control.

As the children age, they attempt to construct a home and family to replace the one that dissatisfies them as children. Ezra gains a surrogate mother in the owner of a neighborhood restaurant, which he then inherits and transforms into the Homesick Restaurant, a place where food is served to comfort and give the diners what they need most, rather than what they ask for. When Ezra finds a girl named Ruth whose personality is down-to-earth and shares his love of food, Cody swoops in and seduces her away for himself. The result is a cool and awkward marriage, and Ruth tries very hard to fit into Cody’s expectations.

Cody’s adult life is an echo in some ways of his father’s, in that he frequently moves his wife and child in pursuit of jobs, never allowing them to put down roots or get comfortable in a home. He persistently avoids contact with Pearl and his siblings, both because of his continuing jealousy of Ezra and his anger about his abusive childhood. Jenny goes to medical school, and marries three different men, the first of whom is very controlling like her mother. Her second husband abandons her with an infant daughter, and after an emotional breakdown, she moves back to Baltimore to be a pediatrician. She then marries a man with many children of his own.

Ezra never recovers from the loss of Ruth, abandoning the pleasure of making music and sinking himself into the development of his restaurant, which struggles in part because of his radical ideas about how it should be run. He lives with his mother Pearl until her death, caring for her as she loses her sight. He struggles with depression, but enjoys some of the closeness he has with Pearl.

The novel ends with Pearl’s funeral, when Ezra attempts to get the entire family to sit down to a meal together finally, a seemingly simple activity that has always been interrupted and unsuccessful due to family discord or eating disorders. After many years of absence, Beck has been invited to attend at Pearl’s request, and his appearance has the effect of reconciling Cody to his family and his memories.

Dinner at the Homesick Restaurant from BookRags. (c)2022 BookRags, Inc. All rights reserved.