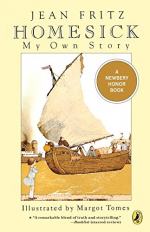 Related Topics
Harriet Beecher Stowe and the Beecher Preachers
Homesick: My Own Story
The Great Little Madison
Traitor: The Case of Benedict Arnold
Why Not, Lafayette?

Jean Fritz
This Study Guide consists of approximately 25 pages of chapter summaries, quotes, character analysis, themes, and more - everything you need to sharpen your knowledge of Homesick.

This detailed literature summary also contains Topics for Discussion and a Free Quiz on Homesick by Jean Fritz.

Homesick is author Jean Fritz's story of her childhood growing up in China in a town called Hankow. While Jean adopts a first-person perspective and includes mostly real-life details from her life, some parts of Homesick are fictionalized in order to add dramatic interest.

Jean starts the story as a ten-year-old girl in the town of Hankow. Her mother and father work for the YMCA doing relief work. She attends a British school there and hates her teacher, Miss Williams, along with a couple of the other students. Her most favorite of her servants is Lin Nai-Nai, a spirited Chinese woman who looks after her as her nanny. In general, Jean feels culturally conflicted, the product of two cultures but not belonging to either one, and she longs for a long-promised trip to America in a couple of years.

Jean's best friend is Andrea Hull, also a daughter in a YMCA family. One Christmas, the Hulls and Jean's family share responsibilities for an orphan named Millie who was invited to partake in the holidays. Mopey Millie tries to run out of Jean's home during hide-and-seek, leading Jean to feel rejected.

The Hulls move away to Shanghai, and Jean's family will be spending their vacation in the mountain town of Kuling as opposed to a coastal city they always vacation in, causing Jean to throw a tantrum. While in Kuling, Jean's mother falls ill from phlebitis in her legs and must endure an extended stay in the hospital. While there, Jean's mother gives birth to a baby girl. Jean is delighted, but joy turns to agony when the prematurely-born baby dies only a few months after being born. The baby is never spoken of again by the mother.

During Jean's time in China (the early to mid 1920s), Communists, Nationalists, and a variety of warlords were vying for supremacy, which eventually led to war and revolution. The nearby town of Wuchang comes under siege by Communists, and Jean's father helps with relief efforts for the sick and wounded there. Lin Nai-Nai's family lives in Wuchang, and she insists on traveling there after the fighting stops. Lin Nai-Nai is rejected and disowned by her family, stemming from her running away from her husband after he chose a second wife.

Soon, Hankow is a dangerous place to live for foreigners, and the family decides they must flee to America. They travel by boat to Shanghai, and then by another boat, the President Taft, to San Francisco, California. From there, the family travels many weeks by car across the country to Washington, Pennsylvania, where they have a joyous reunion with family, including Grandma. The story ends with Jean adapting to life on the Pennsylvania farm, finding a new friend at school by the name of Donald, and finally finding a sense of belonging and identity.

More summaries and resources for teaching or studying Homesick.

Homesick from Gale. ©2005-2006 Thomson Gale, a part of the Thomson Corporation. All rights reserved.