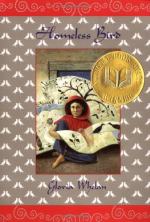 Gloria Whelan
This Study Guide consists of approximately 37 pages of chapter summaries, quotes, character analysis, themes, and more - everything you need to sharpen your knowledge of Homeless Bird.

In Homeless Bird by Gloria Whelan, Koly is a young teenager growing up in India. Though she is only thirteen, the story opens with Koly’s mother pointing out that the time has come to find a husband. Koly’s family will struggle to find enough money to provide Koly’s dowry. She knows that life will be better for her family once there is one less mouth to feed each day. Her parents, referred to by the Hindi as “Maa” and “Bapp,” are good people. Her father is a scribe and often writes letters for people who are not able to pay the full price for his services. Maa is a talented embroiderer and has trained Koly well. As Koly prepares for her wedding, she creates a beautiful quilt for herself, covered with scenes from her home which she will never see again.

Koly is to marry Hari Mehta. Her family has been told he is sixteen. However, when they arrive at the Mehta house, they discover that he is only thirteen. He is very sick. Her parents consider postponing the wedding, but Baap believes brides who do not marry on the day chosen for them by an astrologer will be plagued with misfortune. The day after the wedding, Koly discovers Hari has tuberculosis. The Mehtas had tricked Koly’s parents in order to get her dowry to pay for a trip to the holy city of Varanasi. They believe Hari will be divinely cured once he bathes in the Ganges River. The trip is difficult. Even though Hari drinks and bathes in the river, he dies the day after their arrival.

Once the family returns home, Koly’s life is a cycle of work and scolding from Mrs. Mehta. Mr. Mehta is kind but ineffectual. He teaches her to read and she greatly enjoys poetry. Koly eventually learns the Mehtas have stolen her monthly widow’s pension check and most of the money has gone to fund the dowry of Hari’s younger sister, Chandra. Koly holds to the hope of running away but then Mr. Mehta dies. Mrs. Mehta decides to move to Delhi where she has been promised a place in the home of her brother. She and Koly begin the trip but Mrs. Mehta abandons Koly in Vrindavan, a city filled with widows who have been similarly abandoned.

Koly is rescued after living a short time on the street by a young rickshaw driver named Raji. She is taken in by a charitable group that provides her with food, a place to stay, and a job. The benefactress arrives for a visit one day and, upon seeing the quilt Koly made for her dowry, introduces her to a tailor who hires her to be an embroiderer in his shop. Koly is soon making enough money to move from the shelter but discovers that not everyone is straightforward and trustworthy. Her relationship with Raji continues to develop and Raji one day announces that he plans to return to his farm in the country now that he has saved enough money to begin a life there. Koly knows he will marry and that she will never marry because families would not accept a widow as a daughter-in-law. However, Raji is on his own with no family and continues to press Koly to accept him. She hesitates until the day he writes her a letter, explaining that he’s built a room especially for her to continue her embroidery. Knowing that Raji is kind and that he realizes how important it is for her to continue her work, Koly accepts and, for the second time, begins a quilt to take into her new life.

More summaries and resources for teaching or studying Homeless Bird.