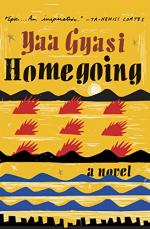 This detailed literature summary also contains Quotes and a Free Quiz on Homegoing by Yaa Gyasi.

Each chapter in the narrative focuses on the experience of a single character, making the book almost as much a series of short stories as it is a novel. The book’s underlying plot is simple: across decades, half-the world, and several generations, the two separated sides of an African family are reunited in the land in which the originating mother of both sides was born.

That mother is a woman named Maame, the one character essential to the story who does not receive a chapter focusing solely on her. Instead, the first two chapters focus on her two daughters by different fathers. Effia remains in Africa, while Esi is taken prisoner by slavers. Before they are taken from her, Maame gives each girl a black stone flecked with gold. Effia keeps hers, and it is passed down to her many descendants. Esi hides hers in the dungeon where she is kept prisoner, but she is unable to retrieve it before she is sent to America.

The Effia line follows her son Quey (fathered by a white man), his son James (who marries for love, not tribal loyalty), and James’ daughter Abena (betrayed by a lover and a traveler into self-imposed exile). Then there is Abena’s daughter Akua (traumatized by both her upbringing in a conservative missionary community and by bad dreams), Akua’s son Yaw (scarred for life as a result of his mother’s dream-defined delusions), and Yaw’s daughter Marjorie. Marjorie is born, and makes her home, in America following her father’s immigration there.

Meanwhile, the Esi line follows her daughter Ness (a slave on an American plantation), Ness' son Kojo (sent into freedom in the aftermath of Ness’s sacrifice for him), and Kojo’s son H (who, after being separated from his father as a child, grows into a powerful, respected miner). Then there is H’s daughter Willie (who has dreams of being a singer, but is betrayed by her husband), Willie’s son Carson (who is given a new nickname by one of Willie’s boyfriends and who becomes a heroin addict), and Carson’s son Marcus. Marcus is born in New York City, but studies in California, where he meets Marjorie.

In the novel’s final chapter, the two lines of descendants are united in the relationship between Marjorie and Marcus. They travel together to Africa, where the fears and memories that haunt them both are released.