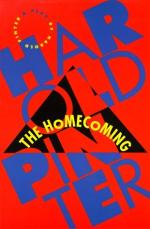 Jessie is Max's late wife and the mother of Teddy, Lenny, and Joey Though she never appears in the play, she is mentioned frequently and her presence is felt throughout. She is praised by Max in saintly terms as being "the backbone of the family" and also condemned by him as a "slutbitch." She had a close relationship with Max's friend MacGregor.

Joey is a rather stupid man in his mid-twenties and the youngest of the three sons. He wants to be a professional boxer and to that end works out in a gym. His regular job is as a demolition laborer. Joey is delighted when he sees Ruth and Lenny dancing and kissing and immediately takes Ruth to the sofa where he begins to "make love" to her. Later, he spends two hours with Ruth alone in ills room but does not "get all the way...