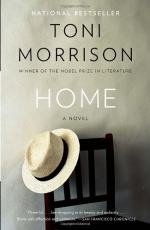 "Home" is a novel by author Toni Morrison. The story follows Frank Money, a Korean veteran, in the aftermath of his life when he is discharged from the army. After watching his two best friends die in front of him, and being responsible for killing numerous people, including a young Korean girl, Frank is suffering from Post Traumatic Stress Disorder (PTSD). For the first year after getting out of the army, Frank drinks too much and lives on the streets. When he decides to sober up and clean himself up, he meets Lily, working at the drycleaner where he takes his army pants and jacket for cleaning.

Frank's rages somehow land him in a psychiatric ward of a hospital. He escapes from the hospital to make his way back to his hometown of Lotus, Georgia. His mission is to save his sister from an unknown illness that is threatening to kill her. As Frank makes his journey from the north to the Midwest to the south, readers have a bird's eye view of the prejudice that follows Frank as he is a black man living in an era where segregation is not completely abolished.

When Frank rescues Cee, a local woman in Lotus, along with the help of the other neighborhood women are able to save Cee's life. Cee and Frank both realize that the town they hated all their lives and couldn't wait to escape from, Lotus, Georgia, is actually their home.