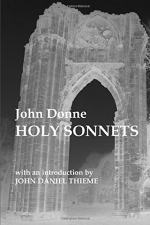 John Donne
This Study Guide consists of approximately 33 pages of chapter summaries, quotes, character analysis, themes, and more - everything you need to sharpen your knowledge of Holy Sonnets.

John Donne's Holy Sonnets are a group of 19 devotional sonnets that take on questions of Christian faith and salvation. Published in 1633 (nearly a decade after Donne's death), the precise order of the sonnets is debated by editors and Donne scholars. As such, the numerical assignment for each poem tends to vary from publication to publication, with scholars working from a number of circulated manuscripts from the period. Because the order of the Holy Sonnets is fundamentally unknown, it is important to approach them largely as individual poems rather than a coherent sequence, despite the fact that scholars have grouped certain sonnets together in a unanimously-acknowledged cohesive progression.

The Holy Sonnets open on a note of resignation as an unnamed speaker announces that he has resigned himself to God in the name of salvation. Anxious about his impending death, the speaker continues to wonder what kind of fate awaits him at the end of his life. Thrilled by the prospect of his soul ascending to heaven, the speaker agonizes over the sins he has committed on earth and begs forgiveness from God, only to express worry over slipping backward again into Satan's grasp.

The speaker continues to wonder whether God will pardon him in the end, and takes solace in the fact that the son of God, Christ, is merciful toward man. But the speaker also begins to contemplate seriously the process of death and the deterioration of his body, ultimately challenging the primacy of the body and refusing to fear death after all. Toggling back and forth between his own voice and the voice of Christ, the speaker imagines what death will feel like, look like, sound like, and be like in the end while also wondering why this type of promised salvation is only available to humanity.

Once the speaker has resigned himself to God, he continues to struggle with the notion of what, exactly, that means. As such, a number of the Holy Sonnets express complex and somewhat shocking relationships between the speaker and God. Asking to be beaten, ravished, and enthralled, the speaker begins to associate the process of religious cleansing with the experience of erotics and violence. The figure of God comes to represent not only the Christian "father" but also the Petrarchan Beloved whom the speaker must flatter and seduce despite his frustrations with how the affair will end.

As Judgment Day continues to approach, the speaker contemplates the relationship between the individual and the collective, imagining that his body is actually its own little world. Concerned with both his own demise and the apocalypse, the speaker continues to wonder what the end of life will look like and how the experience will feel. Noting that a woman he once loved has already died, the speaker becomes dedicated to acquiring God's mercy so that he will be able to join her in heaven. However, as the sonnets come to a close, the speaker is still unsure whether he is practicing the right form of devotion and whether he will be able to continue his pursuit of mercy while living in constant fear of imminent death.

More summaries and resources for teaching or studying Holy Sonnets.