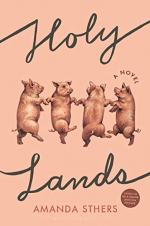 Amanda Sthers
This Study Guide consists of approximately 99 pages of chapter summaries, quotes, character analysis, themes, and more - everything you need to sharpen your knowledge of Holy Lands.

The following version of this book was used to create this study guide: Sthers, Amanda. Holy Lands. Bloomsbury Publishing, New York, NY. First U.S. Edition, 2019. The narrative is structured in the form of communication from one character to another, in the form of either letters or emails. Most of the correspondence is between the members of the Rosemerck family, with several letters also passing between patriarch Harry, who is raising pigs in Israel, and a somewhat conservative rabbi who eventually becomes his friend.

The narrative opens with a letter written by Harry in response to what seems to have been a letter of complaint written by to Rabbi Moshe Cattan. Cattan’s main complaint seems to be that Harry is raising pigs in a country and culture (Israel) in which religious practice forbids the farming and slaughter of pigs on holy land, as well as the consumption of pork. Harry’s response is to describe how he is adhering to the rules, despite finding them profoundly hypocritical. Over the course of the narrative, correspondence continues between the two men, during which time they continue to debate the rules associated with pig farming; discuss the values and practices of Judaism in general; and consider the situation of Jews and Israel within the Middle East, and in the world as a whole. As they write and argue, they find commonalities and eventually become friends, with Harry visiting the Rabbi’s home and the Rabbi offering comfort when conflicts with other local authorities over the pigs threaten to become violent.

The correspondence between Harry and the Rabbi is only one of several plotlines developed as a result of characters writing to each other (by snail mail or by email) as opposed to actually talking to each other. Two other plotlines involve Harry and other correspondence-based relationships – one with his French ex-wife Monique; the other with his troubled daughter, Annabelle, who eventually comes to visit him in Israel and is present when Harry suffers what appears to be a stroke, triggered by the intense conflict over his pig farm.

One relationship-by-correspondence that Harry does not engage with is notable by its absence – a relationship with his famous playwright son David, who has been estranged from Harry ever since Harry found out David was gay. Even though David writes to Harry, making consistent efforts to move beyond the tension between them, Harry does not write back – not, that is, until the end of the book. At that point, shortly after Monique’s death from cancer, Harry finally reaches out to his son, whose unexplained absence from his mother’s life in her last weeks is a notable source of conflict within the family as a whole.

David does have relationships with his mother Monique (who thinks of him as her favorite) and his sister Annabelle (who knows that their mother prefers him, but who nevertheless has a significant bond of affection and history with him). Meanwhile, Monique and Annabelle also have a correspondence-based relationship with each other, one that tends to have a significant amount of tension and resentment built into it. Nevertheless, Annabelle (who, over the course of the narrative, finds out she is pregnant) returns to her mother’s bedside, nursing her through her final weeks and attending her at her death.

All these relationships, with their history of longing and rejection, of person-to-person silence and communication only through the written word, play out with no actual scenes between the characters. Several letters recall or describe scenes of confrontation or conversation, but not in the moment; such scenes are described in their aftermath, when there has been a degree of reflection and consideration that allows the characters to understand the fuller implications of what passed between them. The only aspect of the narrative that is actually “in the moment” is the sense of feeling that infuses each piece of correspondence – of what each character was feeling in the moment that the letter, or email, was being written. Nevertheless, throughout this complicated inter-weaving of questions implied by answers, of poetically hinted-at feelings, and eventually of long-buried secrets revealed, the characters and the narrative develop a sense that finally, the members of this long-separate family have found a somewhat roundabout way of coming together.

More summaries and resources for teaching or studying Holy Lands.