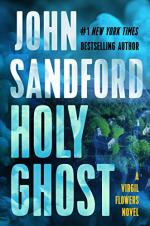 John Sandford
This Study Guide consists of approximately 51 pages of chapter summaries, quotes, character analysis, themes, and more - everything you need to sharpen your knowledge of Holy Ghost.

The town of Wheatfield is dying. The mayor, Wardell Holland, has said that he will do what he can to help the town. However, as there is not much he can do, he spends his time killing flies in the trailer he rents from his mother, the owner of the town’s diner. The town’s fortune changes when its 17 year old genius, Skinner, approaches Holland with the idea of staging the appearance of the Virgin Mary in the local Catholic church. A 33 year old women he sleeps with, Janet, will play the role of the Virgin Mary. He says that the pilgrims coming to see to apparition will bring money and business to the town and that they, as well as the townspeople, stand to benefit.

He is right and five months later there are so many visitors in the town that there is no place for Virgil Flowers, a Bureau of Criminal Apprehension agent Holland has called in to find the identity of and arrest a sniper who has injured two pilgrims, to stay. Holland finally finds a place for Virgil to stay and Virgil, who lives nearby, leaves his pregnant partner, promising to return for her ultrasound and anytime she should need him.

Once in Wheatfield, Virgil finds himself embroiled in a case full of possibilities. His attempt to find the sniper through the sniper’s weapon leads him to the corpse of the owner of the local shooting range. Virgil determines that Glen, the dead man, knew his murderer, was most likely seeing a married woman, and was the owner of the weapon the shooter is using.

Virgil is following leads when the shooter kills a local church parishioner hoping to see the Virgin Mary. Her death makes Virgil and his team believe that she was always the target and that the killer's motive is money. They begin to focus on her son, Barry, as a major suspect. Virgil, however, thinks that he is innocent.

After one of Virgil’s and his team member’s visit to Barry, Barry's neighbor, Davy Apel comes by to see what the police wanted. Barry tells him what is going on and mentions that he will be able to pay Apel back. After saying this, Barry gives Apel a strange look. Apel thinks that this means that Barry knows, or suspects, that Apel is the killer. In order to keep Barry from talking to Virgil, Apel kills Barry. This is not Apel’s first spontaneous murder as he has killed Larry, Janet's ex-fiancé, because Larry, who faced assault charges and charges for selling stolen Legos, blackmailed him after determining that he was the killer. Virgil and his team also realize the Apel is the killer when they discover that Barry has been making loan payments to the Apels and that Margery may have decided to give her money to the church if she had lived long enough to change her will in which case Larry would never have been able to repay the loan.

Virgil and his team run into a roadblock, however, when both Davy and his wife, Ann, have alibis. Virgil is able to put holes in Apel’s alibi and then gets evidence of the couple’s guilt. The law enforcement agents go to arrest the couple, but Ann runs away. They finally catch her, but not until after she tries to commit suicide. The Apels are sent to jail and the town continues to prosper. Virgil discovers that he is going to be the father of twins, a boy and a girl.