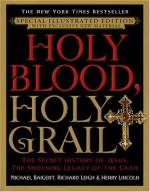 Michael Baigent
This Study Guide consists of approximately 97 pages of chapter summaries, quotes, character analysis, themes, and more - everything you need to sharpen your knowledge of Holy Blood, Holy Grail.

The novel, Holy Blood, Holy Grail, begins as a simple assignment to find out what a country priest in France discovered that made him, among other things, suddenly wealthy. The assignment, however, turns into a discovery beyond all expectation. The authors exhaustively research their topic and find it impossible not to follow a path that will lead them to an explosive conclusion, one with the potential to astonish all of Christianity. As suggested by the book's jacket, this book is destined to be one of the most talked about books not only of the decade, but also of the century.

One of the authors, Henry Lincoln, worked for the BBC and was given the assignment of uncovering the truth behind a country priest's sudden accumulation of wealth during the late seventeenth century. As Lincoln researched the subject, he became aware of many secrets hidden in this priest's story that kept bringing him back to the legendary order of the Knights Templar. Lincoln then enlisted the help of Richard Leigh and Michael Baigent, both experts in the subjects of history and the Knights Templar, specifically.

The three men began their research with the small church where the priest once worked. They realized that they were imagining the many different types of treasure the priest could have found which could have caused him to become such a celebrity with both the cult culture of the time and with his supervisors within the Catholic Church. This line of thought led the investigators to other times in history when treasure had been stolen or lost in this particular region of France. Supposedly, a heretical religious group, The Cathars, had in their custody a great treasure. When the Cathars were besieged during the Albigensian Crusades, this treasure was smuggled from a sealed building surrounded by crusaders and mysteriously disappeared.

The Priory of Sion first came to the attention of the authors while they were conducting their research in France. A group of books, pamphlets, and articles came to their attention: some were popular novels by a man named Gerard de Sede, and most were privately published works donated to the national library in Paris. This collection of works appeared to be part of a conspiracy to expose some great secret: a secret the authors were unclear on. As the authors continued their research, they remained unsure if the order they were reading about really existed. However, after cross-referencing many of these documents with known, authentic documents and with recorded history, the authors soon came to believe in the existence of the order known as the Priory of Sion.

This research took the authors through the foundation of the Priory of Sion, the creation of the Knights Templar to be the Priory's military arm, the severance of that relationship, and the acknowledgement of the diverse men who became grand masters within the ranks of the Priory of Sion. The authors found it interesting that many of the priory grand masters were members of the same bloodline. This brought the attention of the authors to the mystery of the Merovingian Dynasty. The dynasty appeared to have died out thousands of years before with the death of Dagobert II. However, according the Prieure documents, which the authors had come to believe were genuine, the bloodline not only survived this distant assassination, it flourished and still exists to this day.

The authors' research into the Merovingian brought them to examine the question of the Holy Grail. The authors read and analyzed many Grail romances. Some were found to be pure fiction, and some had interesting coincidences that the authors could not disregard. The facts uncovered by the authors soon brought them to the story of Jesus Christ. To research Jesus, the authors turned to the Bible, although they acknowledged that many gospels in the New Testament have been edited and slanted to look favorably upon the Romans. Using their knowledge of the history of the time, of linguistics, and of biblical writings found separate from the Bible, the authors came to many surprising hypotheses.

First, the authors suggest that perhaps the secret the Priory of Sion and the Knights Templar fought so hard to hide had to do with Jesus' marital status. The authors believe that Jesus was married to Mary Magdalene and that he had children with her, resulting in the Merovingian bloodline with which the Priory of Sion seemed so closely entrenched. Second, by identifying many irregularities involved in retelling of the Crucifixion, the authors surmised that Jesus survived his Crucifixion and went on to live many more years.

The lack of true historical fact surrounding Jesus and the inability of the authors to get the existing members of the Priory of Sion to confess their long-held secret does not stop the authors from putting forth their theories. However, the authors conclude that although Jesus was likely married, his marital status does not take away from the idea that he was the Son of God, or served as the mortal form in which God took in order to discover what it was like to be human. The authors assert that it would have been expected of God to be married if his goal was to truly see what it was like to be human. The authors end their book by assuring the readers that these revelations should not shake the reader's faith. They posit that perhaps the world has never been more ready for the revelations they have made in the book, and that the exposure of the true heir to Jesus' bloodline might be like the second coming that many religious believers have been waiting for.