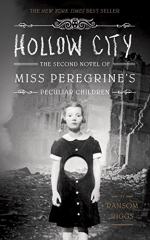 Ransom Riggs
This Study Guide consists of approximately 45 pages of chapter summaries, quotes, character analysis, themes, and more - everything you need to sharpen your knowledge of Hollow City.

Hollow City, by Ransom Riggs, follows Jacob Portman, a peculiar whose talent allows him to sense hollowgasts, the monsters that hunt peculiar children. With this power, Jacob and a group of peculiars travel from Wales to London through the war torn country of England searching for a cure for their ymbryne who is trapped in the form of a falcon. Although Jacob grew up in modernday Florida, through the time manipulating power of the peculiar children's protectors, he ends up in 1940 England during the height of Germany's aggression. Despite their efforts, the wights and the hollowgasts capture all of peculiar children save Jacob and Emma, the girl with whom Jacob falls in love.

The book, as the second in the series, picks up just after the wights have ransacked Miss Peregrine's time loop. The monsters captured the children's caretaker ymbryne, but the kids rescued Miss Peregrine from the wights. The book begins with the children paddling through the sea between Wales and England while the wights pursue them in submarines. Although they were able to rescue Miss Peregrine, she remains stuck in the form of a peregrine falcon. After the children land in England, they flee through the countryside with the wights in pursuit until they stumble upon an untouched and uncorrupted time loop by following clues from the Tales of the Peculiar, a tome that children bring with them.

Even though the time loop's ymbryne, Miss Wren, was searching for her sisters in London, peculiar animals greet them and direct the children to London where the animals suspect the wights hold the ymbrynes. Jacob, with his power to sense hollows, and the other children manage to kill a hollow then head towards London. On their way to the capital, they run into a band of gypsies that eventually shelter them from the wights because both peculiars and gypsies are outsiders. When the children leave the camp to board a train to London, the wights capture them along with the gypsies that welcomed them the night before. Mr. White, the wight in charge, tortures the gypsies in front of the children until Hugh, the bee controlling peculiar, unleashes a swarm upon the wights that kill all 6 of them. Since only another ymbryne can alleviate Miss Peregrine's condition, they hurry on to London by train.

The bombed capital offers even more dangers than the countryside. Consulting the Tales again, the kids read a passage called the Pigeons of St. Paul's which describes the peculiar animals that reside at the renowned cathedral. Knowing that Miss Wren has an affinity for peculiar animals, they find the pigeons in a ruined time loop below the cathedral. In this same time loop, they find peculiar children who hide from two hollows that then chase the entire group back into 1940 London. After hiding in a random house while the Germans bomb the city, the kids flee the house when the wights find them just as a mine strikes the building and destroys the two hollows. Following a peculiar pigeon that Melina, a telekinetic from the ruined time loop, befriended, the group descend into the subways where they find a time loop that leads the children to a circus. While wandering the circus, a peculiar boy directs them to a building that is frozen by ice despite the warm weather. Outside this building, they find Miss Wren who leads them inside the peculiar headquarters of the frozen edifice that prevents wights from entering. During Miss Peregrine's healing at the hands of Miss Wren, Millard, an invisible scholar, discovers that the wights extract peculiar souls then consume them in order to pass through time loops.

With this knowledge, the group gathers around Miss Peregrine and Miss Wren for the final moments of Miss Peregrine's transformation. Instead of their kind caretaker, Caul Peregrine, Miss Peregrine's wight brother, emerges from the falcon form. The children realize that they took the wrong falcon from the submarine. Caul and his fellow wights kidnap the peculiars then take them into a subway station time loop in the present. Here, the peculiars resist their captors and, in the confusion, Jacob and Emma escape only to have a hollow attack them. Jacob who speaks to his father on the telephone, drops his cell then speaks to the hollow in the monster's own language. The beast submits to Jacob's newly found peculiar power and the novel ends.

More summaries and resources for teaching or studying Hollow City.