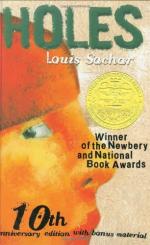 This detailed literature summary also contains Topics for Discussion and a Free Quiz on Holes by Louis Sachar.

This novel is set in modern times and focuses on the current circumstances of Stanley Yelnats, an unfortunate, unlucky young man who is sent to Camp Green Lake for a crime he didn't commit. Stanley's family is poor and believes themselves to be under the curse of Stanley's "no-good-dirty-rotten-pig-stealing-great-grandfather." The curse has been extended through multiple generations and began because the great grandfather, Elya Yelnats, did not keep his promise to Madame Zeroni who helped him. Stanley comes to America, where he marries Sarah Miller, and though they work hard, they are "always at the wrong place at the wrong time." The one Yelnats who was successful, Stanley Yelnats the I, (Stanley's great grandfather) was robbed of his fortune by Kissing Kate Barlow, an outlaw who stole everything he had. Since then, the family has been poor. Stanley's father is an inventor who is trying to find a way to recycle used tennis shoes. Stanley's supposed crime was that he stole a pair of tennis shoes from Clyde "Sweet Feet" Livingston, a famous baseball player who had donated the shoes to an auction to benefit poor boys and girls. In fact, Stanley did not steal the shoes, but happened to be walking under an underpass when they fell down on him, only to be accused of the crime. Being from a poor family, they were unable to do much to fight the charges and Stanley opts to attend Camp Green Lake instead of go to jail.

Most of the novel centers on Stanley's life at Camp Green Lake, which is not a pleasant place at all. No green and no water exists for miles around. The camp is in the middle of a huge desert, and instead of punishment, each "camper" must dig a hole five feet by five feet every day. The camp is run by Mr. Sir, and Mr. Pendanski, the two "counselors" who monitor the boys' activities. The two take orders from the Warden.

The modern-day story of Stanley's life is interwoven with the story of Camp Green Lake a hundred and ten years before, when it was a green, beautiful place and a thriving town. The story of Katherine Barlow and Sam the Onion Man is told, and the past history ties into the present-day predicament of Stanley Yelnats IV.

Everything is not as it seems. The warden is not a man, but a mean-spirited, vindictive woman who paints her fingernails with rattlesnake venom. The holes are being dug, not just for punishment for the boys, but because the warden is looking for treasure buried by Kissing Kate Barlow. The boys have their own power struggles and issues, and soon, Stanley, known as "Caveman" to the other boys, begins a friendship with Zero, an underweight boy that the others think is stupid, but who admits to Stanley that he can't read. Stanley agrees to help Zero learn to read if Zero (who is an excellent hole-digger) will help dig Stanley's hole for an hour every day.

When problems arise, Zero escapes from camp, and shortly after, Stanley too, leaves the relative safety of Camp Green Lake, and eventually finds Zero, near dead from exhaustion and exposure. Together, the two struggle to survive and find a stash of 100-year-old spiced peaches - reduced now to juice - for survival. After an enormous struggle, the boys aim for "God's Thumb," where Stanley's great-grandfather took refuge after he was robbed and left in the dessert. The climb is hard, and Zero is so weak he cannot make it on his own power. Stanley carries him up to the top of the mountain where they find onions growing in abandoned fields. The boy's diet consists of onions and water for days before they sneak back down to the camp to dig in a hole that Stanley believes holds the treasure the warden is seeking.

Stanley and Zero find the buried treasure, but not before they are caught by the warden and her henchman. However even the evil warden is not as bad as the other threat that Zero and Stanley face - the dreaded yellow-spotted lizards. Amazingly, the lizards do not bite the boys because lizards don't like onions, and since that's all Stanley and Zero have eaten for days, they just don't appeal to the yellow-spotted lizards.

While Zero and Stanley have been gone from camp, a woman has come in search of Stanley. The woman uses her authority to release Zero, too, since Stanley won't go without him. The treasure that they have dug up has Stanley Yelnats' name on it, and it turns out that the treasure was his great grandfather's fortune, stolen by Kissing Kate Barlow.

Fortune turns in favor of the Yelnats. Stanley's dad has discovered a formula for eliminating foot odor and Clyde "Sweet Feet" is its principal endorser. Zero has admitted that he stole the shoes, only because he lived on his own and had to steal to get by. The change in fortune stems from the fact that Zero's name is actually Hector Zeroni, the great-great grandson of Madame Zeroni. The promise has finally been kept. A Yelnats carried a Zeroni to the top of the mountain, lifting the curse and changing the fortune of the Yelnats family.