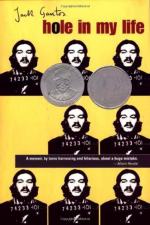 Hole in My Life Setting & Symbolism

Jack Gantos
This Study Guide consists of approximately 32 pages of chapter summaries, quotes, character analysis, themes, and more - everything you need to sharpen your knowledge of Hole in My Life.

Skulls are men in prison who thrive on pain and suffering.

Puerto Rico is where Gantos first begins drinking, as he goes to work as an electrician instead of heading to school for his second half of his junior year.

Fort Lauderdale is a city in Florida where Gantos finishes high school.

The King's Court is the hotel where Gantos finds himself living during his senior year in high school.

Hashish is a drug much like marijuana that Gantos helps traffic from St. Croix to New York.

St. Croix, the largest of the Virgin islands, is where Gantos begins his journey into drug smuggling.

New York is the city where Gantos arrives and helps to sell hash in order to earn money for college.

West Street is the federal holding...