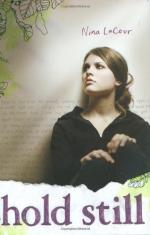 Nina LaCour
This Study Guide consists of approximately 42 pages of chapter summaries, quotes, character analysis, themes, and more - everything you need to sharpen your knowledge of Hold Still.

"Hold Still" is a painful story of loss, grief, depression, and the journey toward letting go, and allowing ones self to heal. When Caitlin's best friend Ingrid commits suicide, Caitlin wants nothing more than to hold still, remembering her love for her friend. However, she slowly learns through her good friends and family that she must continue on with life, and that the first step to healing is to let go of guilt.

"Hold Still" by Nina LaCour is the story of sixteen-year-old Caitlin Madison who is devastated one day when her best friend of several years commits suicide. Caitlin is devastated, and finds herself plunged into darkness and depression, wanting little to do with her family, friends, or anything else. After struggling through the summer, she is forced to attend school, where those she knows pressure her for information about her friends death. Taylor, a local popular boy, soon befriends Caitlin, as does new girl Dylan, and as Caitlin begins to care for them, she finds herself afraid of beginning new relationships, almost in tribute to her beloved deceased friend.

One day, however, Caitlin finds the diary of Ingrid under her own bed and she begins to read an entry every day, keeping her friend alive in her memory. As she reads, however, she slowly learns that Ingrid held a terrible secret life of manic depression, suicidal tendencies, sexual deviance, self-mutilation, and a host of other issues Caitlin only know the surface of. Caitlin slowly realizes she was not to blame for her friend's death, and that Ingrid's decision was her own, and nothing could have been done. It is only when Caitlin is able to forgive herself, as well as Ingrid, that she is able to move forward. With the help of Taylor and Dylan, along with her loving family, Caitlin is finally able to overcome the tragedy, and begin living her life again. Further, as Caitlin is able to heal, so are the others that surround her who have also been hurting, such as Caitlin's parents, teachers, and Ingrid's own family. With the help of photography, a shared love between herself and Ingrid, and the building of a tree house, Caitlin works through her anger and frustration about her friend's death, and realizes she must let go of the past in order to have a valid and hopeful future. In doing so, she helps others understand their own lingering pain, and allows them to begin to heal, as well.

"Hold Still" is a tragic story of loss, depression, and the severe pain and suffering of losing a loved one. It is also a story of hope and healing and of learning to overcome suffering to find strength and happiness. The book is also a story of forgiveness and a renewed sense of hope.

More summaries and resources for teaching or studying Hold Still.