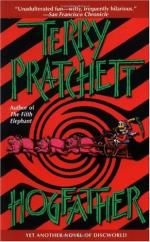 Terry Pratchett
This Study Guide consists of approximately 45 pages of chapter summaries, quotes, character analysis, themes, and more - everything you need to sharpen your knowledge of Hogfather.

Hogfather, by Terry Pratchett, is the story of a beloved Discworld icon and the forces that wish to have him erased from ever existing. With the Hogfather out of commission for Hogswatch, Death dresses up in a red and white suit with a false beard and takes over delivering presents. Susan, Death's granddaughter, begins the search for the Hogfather while Death tries to keeps things running smoothly while they try to find how to get the Hogfather back to his proper place.

The Auditors, immortal creatures that hate human imagination, go to the Assassin's Guild and pay a large sum of money to have the Hogfather killed. The Hogfather is a fat man in a red suit that is believed by children to bring presents on Hogswatch. An assassin, Mr. Teatime, is the only one thought crazy enough to do this job. Mr. Teatime gets a group of thieves together with the promise of ten thousand a man to do the dirty deed.

Susan is the granddaughter of Death. Although she is only adopted, she has many of Death's traits and can walk through walls and become transparent. Death realizes that something has happened to the Hogfather but can't go after the men responsible because he is banned from where they went. Death dresses up like the Hogfather and begins going around the world delivering presents to the children in order to keep a small bit of belief alive. When Death reaches Susan's house he tells her nothing other than that the Hogfather is unavailable and for her not to get involved and leaves.

Susan refuses to sit still and begins to hunt the Hogfather. Susan finds the Hogfather's home empty and collapsing but manages to save a person before it falls in on itself. The person is the oh-god of hangovers, Bilious, and has just recently been created. Susan takes him to the Unseen University where they find new creatures being created because of an overwhelming supply of belief that has just become available. All the oh- god of hangovers can remember is something about teeth.

Following the idea of teeth that Bilious remembers and Susan has seen, she tracks down a tooth fairy that has been kidnapped. Susan and Bilious go to the Tooth Fairy realm and fight Teatime and his men. Teatime is dropped off a balcony and disappears and is thought to be dead. Teatime had been using the children's teeth to control them and their thoughts so they wouldn't believe in the Hogfather anymore. Susan is able to save the Hogfather from the Auditors. The Auditors tried so hard to kill the Hogfather that they accidentally started fighting for their lives, being non-living beings before. With them fully alive, Death is able to kill them.

Susan and Death go back to her home where Teatime is waiting. He has Death's magical sword and is about to kill Death when Susan throws the fireplace poker and kills Teatime. Death explains that without believing in the Hogfather, a little thing that doesn't exist, people wouldn't have been able to believe in anything larger that doesn't exist such as justice, mercy, and duty. The Auditors would have done away with everything that made humans human.

Hogfather from Gale. ©2005-2006 Thomson Gale, a part of the Thomson Corporation. All rights reserved.