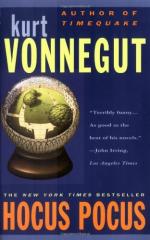 Kurt Vonnegut
This Study Guide consists of approximately 58 pages of chapter summaries, quotes, character analysis, themes, and more - everything you need to sharpen your knowledge of Hocus Pocus.

Kurt Vonnegut's Hocus Pocus concerns the overthrowing of a prison by the largely black prison inmates and their subsequent attempt to form a free independent republic of former prisoners in the small college town adjacent to the prison which they overtake during their initial outbreak. Eugene Debs Hartke, the Caucasian narrator, is an ex-Vietnam officer who actively participated in the slaughter of men, women and children during his phase as a commander of American soldiers, but only reluctantly, and only when given orders to do so from higher authorities. A hater of war because of his experiences, Eugene retires to small Tarkington College in upstate New York, believing the small liberal college will be the answer to his salvation in middle age. There he reflects on his radical leftist upbringing as a child. He was named after a failed socialist presidential candidate and believed until his entry into the military that liberalism was the best philosophy. His youthful idealism conflicts with Eugene's young adult experiences as an enabler of what amounted to civilian genocide during his command. To soothe his pain, Eugene often drinks to excess, rants with his students after class about the rotten nature of American foreign policy, and has affairs with various women professors across the scenic campus.

A zealot right wing media star suddenly accuses Eugene of misleading the students of Tarkington, one of whom is his daughter, with Eugene's poisonous views about America's darker political and historical side. Further adding to Eugene's termination from the school is the fact he's been having an affair with the college president's wife, a fact that is corroborated with detailed records of their illicit meetings at Eugene's termination hearing. Forced to take whatever job he can to support himself and his mentally unstable wife and mother-in-law, Eugene applies for and is accepted at the prison across the lake from the college. He is hired to teach convicts how to read and write. Eugene does so enthusiastically, but is disturbed by the fact that almost every prisoner is black at the facility, while the owners of the private prison are Japanese businessmen seeking stable investments for growth in America. When the riots occur and Eugene is asked for counsel, he advises the prisoners to surrender, since no outcome save their deaths is possible. They refuse to listen and take the right wing media star and his entourage as hostages. Eventually, the law forces stage a liberation of the hostages, killing all the prisoners in the process. Eugene is freed but awaits a certain guilty outcome at an upcoming trial for unfounded charges he actively inspired the prisoners to revolt by making them think about their conditions in the prison.

More summaries and resources for teaching or studying Hocus Pocus.