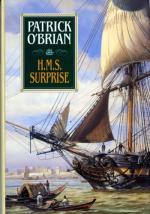 Would you rather be a seaman aboard H.M.S. Lively or H.M.S. Surprise? Why?

Do you consider Jack Aubrey to be the epitome of what a Royal Navy captain should embody? Why or why not?

Do you think that Stephen Maturin could realistically operate on himself using a mirror and a few assistants? Would it really be possible to cut one's one self clear through to the beating heart and extract a musket ball? Is the scene believable?

Contrast the way that Sophie Williams treats Aubrey to the way that Diana Villiers treats Maturin. Should Maturin have been genuinely surprised by Diana's letter in Madeira in which she returned his ring and broke off their engagement?

Maturin purchases a pair of Joe Manton dueling pistols in England—the finest weapons available at any price during the time period. He practices...