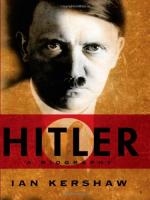 This detailed literature summary also contains Topics for Discussion and a Free Quiz on Hitler by Ian Kershaw.

Adolf Hitler's father changed his named from Alois Schicklgruber to Alois Hitler some thirteen years prior to Hitler's birth. Hitler was said to have claimed that was a good decision. Hitler and his father never got along. Hitler's mother, Klara Polzl, was ineffective against Hitler's domineering father though she was likely the only person he really cared for over the course of his entire life. After his father's death, Hitler moved to Vienna, ostensibly to study art. He was not accepted to the university and lived almost on the streets after his mother's death of breast cancer. For awhile Hitler made a reasonable living creating small paintings sold by a friend. When he failed to register for the military, he fled Vienna to keep from being jailed. He was tracked down in Munich but found unfit for service and released. Soon after, he joined the Bavarian military as an Austrian, probably on a clerical error.

Hitler was taken with the military life. Though he saw heavy fighting and dangerous situations, he was part of a group and seemed taken with that unity. He won the iron cross twice during World War I and found ways to remain in the army for as long as possible. After the war but before being mustered out of the army, Hitler proved what he had always known, which is that he had the gift of public speaking. He was recruited as a propaganda specialist for the Nazi Party and was soon in the thick of that organization. His rise through the ranks was inevitable but he continued to seek advances for the Party rather than personal gain for some time.

His use of propaganda and theatrics was unlimited and Hitler could don any personae to gain the confidence of his audience. He once stood with his arm outstretched for seven hours as some 110,000 members of the Young Hitler organization trooped past. Once out of the public eye, he collapsed with exhaustion.

As chancellor, Hitler had a great deal of power and continued to work toward putting the Nazis in full control of the country. In an unprecedented move, he made himself supreme commander of the government and the military upon the death of the former Reich President. He continued to promote his plans of land expansion and eradication of the Jews. When someone opposed him, Hitler struck forcefully, killing several of his opponents. This earned the condemnation of the rest of the world but the admiration of the Germans who saw Hitler's actions as a decisive way of eliminating a scourge.