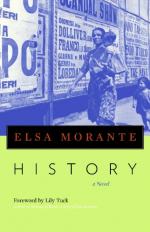 This detailed literature summary also contains Topics for Discussion and a Free Quiz on History by Elsa Morante.

History: A Novel, is a moving saga that follows the life of a half-Jewish Italian school teacher and her young son, who is the result of rape by a German soldier. Ida Mancuso, a widow born in 1904, is a single parent to her son, Nino. She is raped by a young German soldier in 1941 and conceives a child. Her new son, Giuseppe, named after her father, becomes the focus of Ida's will to survive. Giuseppe, who calls himself "Useppe," has seizure problems similar to Ida's childhood illness, which, unlike hers, develop into a more serious medical condition as he grows. His older brother, Nino, is an activist and anarchist, much like his maternal grandfather. Nino lives a brash and dangerous life, and only shows up at home randomly. He is the most important person in little Useppe's life. Ida and Useppe survive periods of devastating poverty and hunger, as well as the abiding horror that her partially Jewish heritage will be discovered and she could become a victim of the Nazi forces.

Ida, whose forced illegitimate pregnancy is a source of shame, returns to her work as a teacher when Useppe is a baby. Useppe is forced to stay in their locked apartment alone with very little stimulation or guidance, although she does check on him. Their lives are simple and sparse. However, when their apartment building is bombed, Ida and Useppe are forced to live in refugee housing in abject poverty. With the closing of the schools, Ida is forced to occupy her days combing the streets in search of food for Useppe and herself, as the large group of refugees wait for news of the Germans' retreat from Italy. It is here that Ida and Nino meet Carlo Vivaldi, who turns out to be a Jew named Davide Segre. Davide's story becomes an important piece of the story's plot.

Ida is emotionally connected by her heritage to the Jews in her neighborhood. She and young Useppe witness a train packed full of human beings who are about to be transported to Auschwitz. Someone tosses a note from the train car, which Ida carries with her from that day forward. The realities of what is really becoming of Italian Jews begins to settle in when the ghetto is virtually empty of people.

Useppe has a number of problems, not the least of which is his unreliable brother whom he adores, and who shows up only occasionally. He also suffers from epileptic seizures, made worse by malnutrition during the bad times. Nino's dog, Bella, becomes Useppe's best friend and stays with him until the end of his life. Nino, who goes from rebel fighter to black market dealer, is killed in an accident. Davide Segre dies from a drug overdose. Useppe dies from the effects of untreated seizures. Ida Mancuso, who finds the meaning of life only through her son, Useppe, loses her sanity when he dies, and is taken to an asylum where she dies nine years later. The dog, Bella, is shot by police when she refuses to allow them access to Ida and Useppe.

The story is punctuated by summaries of the global news as it relates to the horrendous events of World War II and after. Some summaries span a period of several years. Therefore, this is not just a novel, but also a documentation of world history that provides the reader with an idea of what one small family might have endured over the period of 1904 through 1947. A followup of world history that spans from Ida's death until 1955 reminds the reader that, as history rolls on, war is ever-present.