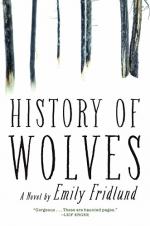 Emily Fridlund
This Study Guide consists of approximately 56 pages of chapter summaries, quotes, character analysis, themes, and more - everything you need to sharpen your knowledge of History of Wolves.

This detailed literature summary also contains Quotes and a Free Quiz on History of Wolves by Emily Fridlund.

Linda Furston was a teenager when a four-year-old named Paul moved into their neighborhood. She soon met his mother, Patra, who barely seemed to be an adult. Paul's father, Leo, was in Hawaii where he worked. Patra asked Linda to keep Paul away from their lake house for a few hours each afternoon while she worked at editing Leo's writing. Linda quit her job at a local diner and began to watch Paul. Their relationship was complicated and she sometimes did not like him very much. Paul felt the same about Linda, often lashing out at her when he was tired or angry.

Linda initially felt that Paul's health, including a breathlessness, was just part of his makeup. She noticed small details, such as discolorations of his skin and a sweetish odor of his breath, that she later learned were signs of the edema that took his life. She discovered that Patra had begun putting him in a diaper, especially at night, and later learned that incontinence was another symptom. Leo arrived at the lake house for an extended visit and asked Linda to accompany them on an overnight trip to Duluth. During the trip, Leo began to question Linda's core beliefs, apparently in an effort to sway her to his train of thought. By the time that trip was over, Linda was worried about Paul. At one point, she offered to go to town to get some Tylenol, as if that might help Paul. Patra agreed and Linda wandered around town for awhile, but never found a way to ask anyone else for help. Paul died that night.

A trial ensued and Linda was called to testify because she was one of the few people who had interacted with Paul during those months. Leo and Patra cited their Christian Science ideology as the reason they did not seek medical treatment for Paul, and they were acquitted of any responsibility for his death. What Linda never said during the trial was that Patra seemed to be trying to tell her something, and Linda felt she was either thanking Linda for going to get Tylenol or asking her to get help.

That same year, a teacher at Linda's school died and Mr. Grierson arrived to take his place. Linda kissed him one day, but he did not respond. Soon, rumor circulated that he had impregnated another girl in her class, Lily Holburn. Linda had always been interested in Lily's life, but she wanted to intervene on Mr. Grierson's behalf. She wrote a letter to give to Lily, but when Lily returned to school after the summer break, she was obviously pregnant and Linda did not give her the letter. Linda tracked Mr. Grierson down through a website that keeps track of sex offenders. She contacted him by letter and he wrote back. Their communication did not absolve Linda of her desire for answers about Mr. Grierson or his relationship with Lily.

After high school, Linda briefly attended a community college, then got a job. She had a roommate but never got close to the woman. She was in a sexual relationship with a mechanic, but never allowed that to progress to a permanent or formal arrangement. She continued to drift in this way until her father died and her mother needed someone to care for her. Linda returned home, at age 37, and sold off some of the family property to pay debts.

More summaries and resources for teaching or studying History of Wolves.