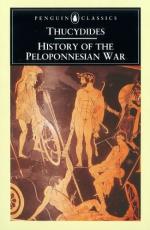 Thucydides
This Study Guide consists of approximately 49 pages of chapter summaries, quotes, character analysis, themes, and more - everything you need to sharpen your knowledge of History of the Peloponnesian War.

History of the Peloponnesian War Summary & Study Guide includes comprehensive information and analysis to help you understand the book. This study guide contains the following sections:

This detailed literature summary also contains Topics for Discussion and a Free Quiz on History of the Peloponnesian War by Thucydides.

For approximately fifty years prior to the outbreak of hostilities in 431 BC, the city-state of Athens had accumulated enormous monetary reserves and extensive political influence in the Aegean region and beyond. Athens' political supremacy led to empire and her traditional enemies, as well as some of her vassals, viewed Athenian ascendancy with suspicion. Opposition to Athenian empire coalesced around Sparta, the nucleus of the Peloponnesian League. For several years political tensions mounted as various diplomatic failures occurred until hostilities broke out. The war sputtered into life as Athens and Sparta took opposing sides in several minor local outbreaks. Over the next several years Sparta's superior land forces conducted annual destructive invasions of Attica while Athens' superior naval forces conducted constant raids along the coast of the Peloponnesus. Additionally, the war rapidly spread into adjoining geographical areas. The first phase of the Peloponnesian war, ranging from 431 to 421 BC, was marked by a series of destructive but inconclusive engagements and came to a conclusion in an uneasy armistice. This phase of the war is sometimes referred to as the Archidamian war and concluded with the Peace of Nicias.

However, both belligerents continued intense political and diplomatic maneuvering, accompanied by occasional minor military actions. Within a few months, the Peace of Nicias began to disintegrate until 415 BC, when Athens launched a massive military attack upon Syracuse in Sicily. Due to various factors, including an incompetent leader, the Athenian attack proved disastrous and most of the Athenian armed forces were annihilated in 413 BC. This second phase of the Peloponnesian war thus resulted in a decisive and irreversible setback for Athens.

The third phase of the Peloponnesian war, ranging from 413 to 404 BC, is often referred to as the Decelean War, or the Ionian War. During this period Sparta gained notable assistance from Persia and successfully encouraged many Athenian subject cities to revolt. The net result was a gradual but inexorable undermining of Athenian political power and a remarkable decline in Athens' naval military power. Following a disastrous defeat at Aegospotami, Athens surrendered. The net effects of the war included widespread economic depression, the transfer of effective political leadership from Athens to Sparta, and the establishment of far-ranging political systems which ensured numerous minor civil wars for the next several decades. Simultaneously, the technologies employed in warfare were revolutionized. Historians nearly universally agree that the Peloponnesian war marked the end of the Golden Age of Greece.

More summaries and resources for teaching or studying History of the Peloponnesian War.

History of the Peloponnesian War from BookRags. (c)2022 BookRags, Inc. All rights reserved.