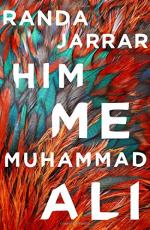 Him, Me, Muhammad Ali Quotes

Jarrar, Randa
This Study Guide consists of approximately 41 pages of chapter summaries, quotes, character analysis, themes, and more - everything you need to sharpen your knowledge of Him, Me, Muhammad Ali.

If, many years ago, Dulles hadn’t thought Nassar was bluffing, Egypt would never have found an ally in Russia, and her [Qamar’s] performance may have been held in Washington, where van drivers rarely hold romantic sentiments about the moon or any other heavenly object.
-- Qamar (chapter 1)

Importance: Qamar recounts events that have caused her parents’ accidental death. The list of possible events showcases both Qamar’s grief and cosmic alignment. In the characterization of Qamar, this notion of rearranging past events will relieve her of burden. If the aforementioned events did not happen, then the possibility of her parents dying in a car accident would be removed, and she would not need to live in so much grief that her life appears meaningless. The quote also showcases how many events the cosmos must align in order for one outcome to happen in a personal life.

More summaries and resources for teaching or studying Him, Me, Muhammad Ali.

Him, Me, Muhammad Ali from BookRags. (c)2022 BookRags, Inc. All rights reserved.