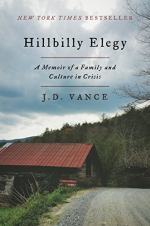 Hillbilly Elegy by J.D. Vance describes the author’s life up to this point and uses his experiences to illustrate the challenges facing hillbilly society generally. The memoir begins with a description of Vance’s family in Jackson, KY. These relatives, he states, were part of a storied hillbilly family with a strong reputation in their community. They embodied many of the most prevalent values of this culture, most notably fierce loyalty to each other and a deep respect for personal honor that often dictated a violent response to perceived slights. Vance’s grandparents, whom he calls Mamaw and Papaw, migrated from Jackson to Middletown, OH to work in an industrial steel mill. This experience was common among hillbilly families at the time, many of whom left their rural homes for urban areas. In Middletown, Mamaw and Papaw had three children, the author’s uncle, aunt, and mother.

Although he lived with his father in early childhood, the two were separated when his parents divorced and would not reconnect for many years. J.D. spent the majority of his childhood living with his mother in Middletown, though he often visited Jackson, a place he will always consider his “home.” J.D. also had a very close relationship with Mamaw and Papaw, who strove to support and encourage him to achieve high levels of success. This support became particularly important as J.D.’s mother became emotionally unstable and struggled with drug addiction. His middle school years, in which J.D. moved frequently due to his mother’s constant change of boyfriends, were extremely challenging for the author. Eventually, he lived permanently with Mamaw, an experience he credits with allowing him to succeed in life. It is clear throughout his memoir that Mamaw was his single most important influence.

After graduating high school, J.D. joined the Marines for four years before attending college at Ohio State. This experience instilled him with a strong work ethic and the confidence that he had the ability to better his life through his own choices. This feeling, as Vance argues extensively, is largely absent from hillbilly society. He considers this to be a major cause of the decline and poor outlook of communities like Middletown. Following college, Vance attended Yale Law School, where the differences between his lifestyle and that of professional-class Americans became extremely clear. At Yale, J.D. met and began dating his future wife Usha. The two are happily married lawyers, but J.D. still feels that his hillbilly upbringing plays a major role in his life. Throughout the memoir, the author suggests how his society could be improved, most of which center around the need for its members to take responsibility for their own problems.