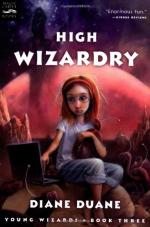 Diane Duane
This Study Guide consists of approximately 49 pages of chapter summaries, quotes, character analysis, themes, and more - everything you need to sharpen your knowledge of High Wizardry.

High Wizardry by Diane Duane is a fantasy that is the third book in the Young Wizards series, preceded by Wizards Abroad and Deep Wizardry. In this third of the continuing series, Nita's younger sister Dairine discovers her sister's wizard's manual and looks through it, reading the Oath that her sister and Kit took. It is not long afterward that she discovers she also possesses the power of Wizardry. Nita has even informed her parents of the truth and though they took the news relatively well, now every time Nita leaves the house to spend time with Kit, they worry that she is on an assignment and will be in danger.

On the morning that the family's brand new Apple computer arrives, Dairine is beyond excited. She has looked forward to this for some time, and can hardly stand how slowly her parents are assembling the few items required to set it up. As they sit on the floor with the various manuals and debate the steps involved, Dairine quietly assembles it behind them and boots it up. The first thing she notices is that the Apple logo does not have the traditional bite taken out of it. The DOS prompt is below it, and she manages to find her way into the directory after being asked for, and creating a password. All the while, she is terrified that her parents will turn around and see what she is doing. The computer displays a list and she types 'copy' to see if it will run. She hardly understands what is being asked, and after simply pressing enter, the computer creates an exact duplicate of itself. She types 'hide' and names the copy only to have another menu ask her where. She selects 'otherspace' from the list and gives it a password for retrieval, adding verbal to its command input options. It vanishes as her father turns to see what she is doing and promptly decides that she is in the way. He sends her to the Planetarium with her sister and Kit. Dairine's life will never be the same.

After managing to get five minutes alone just as the Planetarium is closing, having told Kit and Nita she had to use the washroom, she quietly retrieves her copy of the computer from otherspace, and decides to try the Transit function. When it asks her 'inside solar system or outside solar system' she almost drops it. Moments later, she has transitioned to Mars. Once she has an idea of how to travel, she doesn't want to stop. It is everything she ever dreamed of. She makes a copy of herself, and sends it home, hoping to buy herself some time to play, and begins jumping from one stop to another. Though seemingly random, the powers she is accessing would not be given to her unless it was time, and she was needed. Both situations apply, although Dairine is unaware of the importance of her travels. While fleeing from one unsatisfactory experience, she finds herself on a silicon based planet where she is able to stop and get her bearings. The computer helps, and when its power runs down, it accesses the planet itself to recharge. This begins an entirely new situation. Dairine becomes active in the development of the planet after discovering a consciousness, giving the planet a form of life able to access the space around them. Her constructions are intelligent and curious, and she soon finds herself modifying even them to create a wider variety of entities more capable of looking after themselves when she is gone. All of this activity attracts the 'Lone Power' - a Power cast out from the rest after creating entropy and the concept of death. The abundance of new life is like a lure, and he cannot resist spreading his brand of entropy even here. Thus begins the confrontation that Dairine sought from the beginning, hoping to make a difference with her life, and even offering her life to defeat him if necessary. Kit and Nita follow her trail and, together, they not only subdue but manage to convince the Lone Power that his reign of unhappiness is over. Aided by his sister, represented to them as a Macchu Picchu until she reveals herself as the Winged Defender, the Lone Power transitions back to the 'Beautiful One' he once was, and rejoins the other Powers while, exhausted, the others return home until the next time they are needed.

More summaries and resources for teaching or studying High Wizardry.