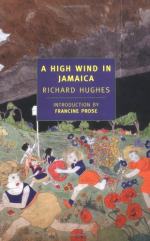 Richard Hughes
This Study Guide consists of approximately 53 pages of chapter summaries, quotes, character analysis, themes, and more - everything you need to sharpen your knowledge of High Wind in Jamaica.

The hangman's blood cocktail symbolizes a fundamental clash between northern and southern cultures. This cocktail, the first mention of which was in this novel, is “compounded of rum, gin, brandy, and porter” (102). While the Danish Jonsen believes that it will invigorate the auction, instead it causes the audience to lose all attention and fall asleep. There is a certain amount of trickery also imbued in the drink; “Innocent (merely beery) as it looks, refreshing as it tastes, it has the property of increasing rather than allaying thirst, and so, once it has made a breach, soon demolishes the whole fort” (102). Jonsen, not a hard drinker himself, believes that he has come up with a clever plan; however, despite the cocktail’s macho name, it is ironically the ultimate cause of his loss of authority among the townspeople.

The pigs symbolize the difficult...

More summaries and resources for teaching or studying High Wind in Jamaica.