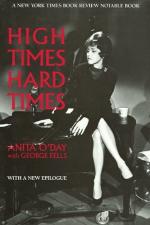 Plot Summary
+Chapters Summary and Analysis
Chapters 1-2: Excess Baggage, Cutting Loose
Chapters 3-5: Uptown, Walking on the Wild Side, Oh, For the Life of a Girl Singer
Chapters 6-9, The Road That Leads to Fame, Sometimes the Road is Rocky, And You're Just Another Dame; Busted
Chapters 10-12: Got the Name, Will Play the Game, What a Difference a Hit Makes, Hard Times
Chapter 13: I'm Still Here, Epilogue
Free Quiz
Characters
Objects/Places
Themes
Style
Quotes
Topics for Discussion
Order our High Times, Hard Times Study Guide

Anita O'Day
This Study Guide consists of approximately 24 pages of chapter summaries, quotes, character analysis, themes, and more - everything you need to sharpen your knowledge of High Times, Hard Times.

The "jazz age" in America is a unique and fascinating period in our history. Having it described and "exposed" by one clearly immersed in every part of it is the beauty of Anita O'Day's autobiography. Born at the beginning of the jazz era, O'Day knows at an early age that singing will be her personal quest, no matter where it might take her. From engaging in talent portions of dance marathons to singing in Chicago taverns at age sixteen, this vocalist is determined to take the risks that will ultimately catapult her into national fame. The path is neither straight nor even. From the taverns, Anita moves into headlining at jazz clubs and, eventually, to singing with some of the top jazz bands and orchestras in the country, including Gene Krupa and Stan Kenton. She tours Europe and Asia, to wildly receptive audiences. In between, she faces her demons, often succumbing to them. Her promiscuity leads to illegal abortions and emergency hospital procedures; with husband Carl Hoff and fellow musician John Poole, she moves from alcohol and marijuana to heroin, becoming so addicted that she sacrifices her career and lands in prison. Staging a successful comeback, it looks as if Anita is finally on the way to becoming the premier female jazz vocalist in America. She reunites with Gene Krupa for awhile, participates in jazz festivals in both the U.S. and abroad, and is booked into famous, high-end clubs all over the country. She and drummer John Poole, however, cannot resist heroin and, again, it controls their lives. Further, jazz is declining in popularity, giving way to rhythm and blues and rock and roll. Anita's career hits a plateau, and she is forced to take "gigs" in small clubs for whatever they will pay. Returning to New York for an engagement, she contacts an old supplier and overdoses in an office bathroom. Escaping the hospital and hopping a flight to Hawaii, she is able to avoid the police and has yet another opportunity to get clean. This time, it sticks. Anita returns to the mainland, revives her career, and culminates that revival with a fifty-year anniversary concert at Carnegie Hall.

The jazz aficionado will appreciate this work for its detailed accounts of both the music and the artists. Against the backdrop of her own life, Anita O'Day has written perhaps the definitive work on the chronology of jazz, from its beginnings in the 1920s, to its peak in the 1940s, to its demise in favor of the rhythm and blues and rock and roll of the 1950s and 1960s. Jazz, however, has its loyal followers, and it will remain a major piece of American musical history. High Times Hard Times is more than just a story. It is a piece of history.