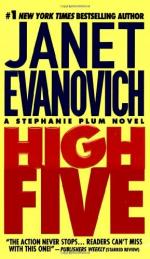 Janet Evanovich
This Study Guide consists of approximately 34 pages of chapter summaries, quotes, character analysis, themes, and more - everything you need to sharpen your knowledge of High Five.

This detailed literature summary also contains Topics for Discussion and a Free Quiz on High Five by Janet Evanovich.

High Five is the fifth installment in Janet Evanovich's Stephanie Plum series. In this novel, Stephanie finds herself searching for one of her uncles who went missing while on his normal afternoon errands. Stephanie follows every lead she comes across, including a dispute her uncle was having with his garbage company. At the same time, Stephanie is desperate to make some money, so she asks Ranger to throw a few jobs her way through his security company. However, working closely with Ranger causes a new set of problems for Stephanie, especially in her on-again, off-again relationship with an old flame, Joe Morelli. High Five is another fast-paced, comic adventure that will leave readers guessing even past the last page.

Stephanie Plum is a bounty hunter who cannot get enough work to pay the bills. Only one client has missed his court date, leaving Stephanie desperate for money. After Stephanie attempts to apprehend the fugitive and fails, she asks fellow bounty hunter Ranger to throw some work her way through his security company. Ranger enlists Stephanie's help in evicting a drug dealer illegally from his apartment. Later, Stephanie shares night guard at the apartment building. The drug dealer returns with a gun and his chest strapped with explosives. Stephanie is held at gunpoint, forced to take the man back to his apartment. While Stephanie attempts to explain that Ranger's men took all the man's things away, a neighbor comes out of her apartment. The woman pulls a gun on the drug dealer when he fires at her, shooting him and causing the man to explode.

The next job Ranger offers Stephanie is a chauffeuring job. Stephanie pulls over to get her spoiled, teenage passenger a drink, and he steals the car. Rather than fire her, however, Ranger continues to throw work Stephanie's way. During this same time, Stephanie finds out her uncle is missing. Stephanie visits her aunt to see if there is anything she can do. Stephanie learns that her uncle had a dispute with his garbage collection company that he intended on dealing with the day he disappeared. Stephanie's aunt also gives Stephanie some pictures she found in her husband's desk. The pictures appear to depict a female body that has been dismembered and placed in garbage bags.

Stephanie talks to a cop friend who tells her how her uncle's car was found in front of the grocery store with the dry cleaning neatly laid out in the backseat. The cops seem to think Uncle Fred simply got confused and wandered off. Stephanie also learns that Uncle Fred was having an affair, something that was not new in Fred's daily routine. While investigating his disappearance, Stephanie meets up with a man who claims to be Uncle Fred's bookie, hoping to find Fred in order to collect on some money. This man, Bunchy, wants to work with Stephanie to find Uncle Fred. Stephanie refuses, but Bunchy begins following her anyway. Also during this time, Stephanie learns that Benito Ramirez, a crazed rapist, has been released from jail. Stephanie helped put Ramirez in jail, therefore has reason to believe he might come looking for her.

Ranger has Stephanie help him with another job. This job consists of Stephanie distracting a man while Ranger and his guys repossess his car. Stephanie is in the middle of flirting with the guy in a bar when Ramirez comes in and threatens the guy. A fight breaks out, emptying out the entire bar. A short time later, Stephanie laments the Buick she is forced to drive. Ranger overhears and soon presents her with a new black Porsche, calling it a company car. Stephanie accepts the car, using it to go visit her on-again, off-again lover, Morelli. However, when Stephanie arrives at Morelli's she sees an old girlfriend of his dropping him off. Stephanie becomes enraged with jealousy, pushing Morelli away, while at the same time finding herself conflicted over her feelings for Ranger.

Stephanie takes the Porsche to visit first the local bank, curious if the check her uncle set aside to prove payments he made to the garbage company is legitimate. Afterward, Stephanie takes the check to the garbage company where an employee tells her there is something strange about the check. The check was cleared by a local bank rather than the big bank the company normally uses. Stephanie is about to leave when the employee calls her back inside for a short time. When Stephanie finally leaves, a garbage truck runs into the side of the car. While they argue about the accident, the Porsche explodes causing the garbage truck to fall onto the Porsche.

More summaries and resources for teaching or studying High Five.