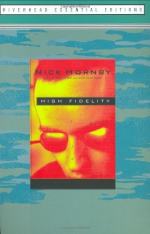 Nick Hornby
This Study Guide consists of approximately 34 pages of chapter summaries, quotes, character analysis, themes, and more - everything you need to sharpen your knowledge of High Fidelity.

This detailed literature summary also contains Topics for Discussion and a Free Quiz on High Fidelity by Nick Hornby.

High Fidelity is a novel written in 1992 by the British author Nick Hornby. The story detail's Rob Fleming's struggles to cope from the break up of his relationship with Laura and his failing record shop. A major part of Rob's problem is his habit of replacing his real opinions and feelings for a series of lists. When he breaks up with Laura he makes a list of his top five relationships and goes on a mission to discover where he has gone wrong.

The book opens with Rob's top five break ups. The list includes Charlie Nicholson, Allison Ashworth, Sarah Kendrew, Jackie Allen, and Penny Hardwick. He has written the list because his girlfriend Laura has just broken up with him. He claims the breakup lacks any real tension, which Rob thinks defines their relationship. He waits for Laura to leave the house before smoking a cigarette.

Rob owns his own record store called Championship Vinyl. He is late and his co-worker Dick has opened the shop. By midday, his other member of staff Barry arrives. It is not his day to work, but Rob explains, that though Dick and Barry both work part-time they come to the shop every day.

The three of them pass the time by making tapes of their favorite bands and top five lists of their favorite songs of, for example, the first track on the first side of an album. Rob thinks it is good to have something to do because most days Rob receives very few customers. Even when someone walks in he often drives him or her away because they do not like the right sort of music. On the morning Rob breaks up with Laura, Barry swears at a customer because he asks for the Stevie Wonder tune I Just Called to Say I love You.

In the evenings, the three of them go to gigs at a pub called the Harry Lauder. On the day of Rob's break up, they go to see the American singer Marie LeSalle. She has an excellent voice and Rob falls in love with her, even getting jealous when her band member T-Bone shares her microphone. Marie surprises the three men by approaching them and asking if they know any good record shops in the area.

Marie becomes a regular at Rob's store, inviting the three men to her gigs and embarking on an affair with Rob. Rob likes Marie, but he cannot stop thinking about Laura. Laura still phones him regularly and to make matters worse she is living with his old neighbor Ian Ray, a man he hates.

Rob's jealously leads him on a quest to discover where he has gone wrong in his past relationships. He contacts the five women on his list and goes to see them one by one. Allison Askworth married the man she left Rob for. He is surprised because she was his first girlfriend at the age of fourteen. He visits Penny Hardwick in a cafe. She tells him the reason she did not want sex with him is because she was in love with him and wanted to wait. When he broke up with her she was so upset she slept with the first boy that asked. Jackie Allen married Rob's friend Phil. Rob thinks they are officially the most boring couple in South of England. Sarah is the female version of himself. Rob knows he could probably sleep with her, but decides to leave it.

His most memorable relationship was with the beautiful punk Charlie Nicholson. He phones her up and she invites him to a party at her house. As soon as Rob arrives, he feels out of his depth because everyone in the room, apart from him, has good jobs, marriages, and kids. After making a few inane comments, he decides to keep the conversation to the minimum and the drinking to the maximum. By the end of the night he is drunk enough to ask Charlie why she left him for Marcus. She tells it was because he was insecure about her and it in turn made her feel insecure. In the end, she felt like she was dragging him around.

Everything changes when Laura's dad dies. Her father was very fond of Rob and she invites him to the funeral. The funeral is a difficult affair and Rob, getting in an argument with his friend Liz, storms out of the house. He is lying in the neighbor's flowerbed when Laura stops by in her car and tells him to get in. She says she has also walked out of the funeral and now she wants to take Rob somewhere to have sex.

The sex does not work out, but the two of them realize they want each other back. Laura moves back into Rob's apartment on the condition he sorts out his life. She tells him to write a list of his top five dream jobs. The only practical one he comes up with is an architect. However, when he realizes it takes seven years of training he decides against it. Instead, Laura helps him to make the best of what he already has. They arrange for Marie LeSalle to play at his record shop, and then resurrect his career as a DJ at the Dog and Peasant pub.

More summaries and resources for teaching or studying High Fidelity.