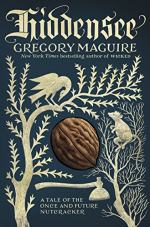 Related Topics
Confessions of an Ugly Stepsister
Lost
Mirror Mirror
Wicked: The Life and Times of the Wicked Witch of the West

Hiddensee: A Tale of the Once and Future Nutcracker Summary & Study Guide

Gregory Maguire
This Study Guide consists of approximately 53 pages of chapter summaries, quotes, character analysis, themes, and more - everything you need to sharpen your knowledge of Hiddensee.

Hiddensee: A Tale of the Once and Future Nutcracker Summary & Study Guide Description

Hiddensee: A Tale of the Once and Future Nutcracker Summary & Study Guide includes comprehensive information and analysis to help you understand the book. This study guide contains the following sections:

This detailed literature summary also contains Quotes and a Free Quiz on Hiddensee: A Tale of the Once and Future Nutcracker by Gregory Maguire.

The following version of this book was used to create this study guide: Maguire, Gregory. Hiddensee: A Tale of the Once and Future Nutcracker. William Morrow, 2017.

In Bavaria in 1808, Dirk, a young foundling boy, grew up in a cabin called waldhütte with an old man and old woman who raised him. One day, the old man took Dirk into the forest to teach him to become a woodcutter. Dirk accidentally injured the old man with the axe and the tree he was cutting fell on Dirk. Dirk died and woke to find a gnome and a thrush speaking to him in a forest that he would come to know as the Little Lost Forest. Dirk returned to his world with a wooden crutch and a knife with a gnome-head carved into it, waking up in the waldhütte. The old man and old woman were discussing getting rid of Dirk, who had come back from death. Dirk left the couple who raised him and the cabin behind.

After traveling for some time, Dirk stayed with Pfarrer Johannes, a Protestant minister, in his chapel. The minister sent Dirk on an errand to deliver a message to a Bishop in Meersburg, giving him the last name of Drosselmeier. When Dirk arrived in the new town, the Bishop would not give him a reply to return to Pfarrer Johannes, so Dirk found work at the house of a local wealthy family, the von Koenigs. Dirk became transfixed with a kitchen maid, Hannelore. He also became friendly with Felix Stahlbaum, a friend of Baron von Koenig’s son, who played beautiful music on the cello. One evening, Dirk led Hannelore to the locked chapel where Felix often practiced his cello. Hannelore undressed with the intent to have sex, but Dirk felt embarrassed, especially once he heard Felix arrive at the other side of the church. A scandal arose when Hannelore became pregnant and people suspected Dirk of being the baby’s father. However, Felix took responsibility for the child and the Baron let Dirk go from his staff.

Baron von Koenig recommended that Dirk become the assistant to a paper merchant he knew in Meersburg, Gerwig Pfeiffer. Pfeiffer hired Dirk, who moved into the Pfeiffer establishment with the merchant’s family. Dirk helped take care of Pfeiffer’s two sons, Franz and Moritz. He became intrigued by Pfeiffer’s mysterious wife, a Persian woman named Nastaran, who would often hide when Dirk was present. Pfeiffer left on a business trip and had Dirk stay behind to take care of his family, especially Nastaran who walked while she slept. Dirk ran into Felix in town and, when he mentioned Nastaran’s condition, Felix set up an appointment for her to see a doctor.

Dirk brought Nastaran to Doktor Mesmer, who deduced that Nastaran walked in her sleep to try to find a place from her past where she had to abandon a child and she must open a walnut to find the key to her life. Dirk also fell under a trance when the doctor administered the hypnosis and saw visions of the forest and figures from his brush with death as a child. Dirk returned to the doctor later and discussed his visions. After leaving, he encountered Pythia and Pan, famous figures from Greek mythology, in the forest. Dirk ran into Felix, who, as a scholar, was interested in Dirk’s experience.

Nastaran sent Dirk, Felix, and her sons on a trip to visit the boys’ uncle. Dirk did not want to leave Nastaran, with whom he had fallen in love, but left with the group due to her insistence. Dirk and Felix brought the boys to their uncle and headed back to Meersburg the same day. They got caught in a storm and stayed in a local farmer’s barn for shelter overnight, where Dirk carved a nutcracker as a gift for Nastaran and Felix tried to seduce Dirk. Dirk and Felix returned to Meersburg and parted ways. Dirk learned that Nastaran had died while he was away.

Heartbroken, Dirk stayed in the Pfeiffer establishment for eight years, then left to travel for 15 years. Upon returning to Germany, Dirk set up a toy shop in Munich to sell his carved figurines. One day, Felix entered Dirk’s shop and invited Dirk to meet his family. Dirk went to the Stahlbaum house and met Felix’s wife Ethelinda and their sons Günter and Sebastian. Felix invited Dirk to accompany him and his family to go to Meritor, his summer house, where they could see the beautiful island of Hiddensee.

Dirk, who came to be called Drosselmeier over the years, helped Ethelinda and her family after Felix’s sudden death. The boys grew and Sebastian got married and named Drosselmeier godfather of his children, Fritz and Klara. Drosselmeier made toys for his beloved godchildren. One winter, Sebastian revealed to Drosselmeier that Klara was ill with a heart condition and often got fevers that made her imagine mice in the house. They promised to give Klara a good Christmas. Drosselmeier gave Klara the nutcracker he made years ago and told her the story of the rivalry between the Nutcracker and the Mouse King. On Christmas night, Klara had a fevered dream that compelled her to leave her bedroom and go downstairs where the Nutcracker and toys fought with the Mouse King and mice. Klara helped the Nutcracker win the battle, but injured her arm on broken glass. Klara’s fever miraculously broke during the night. Drosselmeier had Klara promise him that she would go to the Little Lost Forest that he had not been able to figure out during his lifetime.

Klara lived a long life. Drosselmeier died and decades later Klara died. She had a dream on her final night, in which she relived the events of the Nutcracker and Mouse King battle. Then, in the dream, she went to Meritor, her family’s summer home, where she saw the island of Hiddensee and the Little Lost Forest.

More summaries and resources for teaching or studying Hiddensee: A Tale of the Once and Future Nutcracker.

Hiddensee: A Tale of the Once and Future Nutcracker from BookRags. (c)2022 BookRags, Inc. All rights reserved.