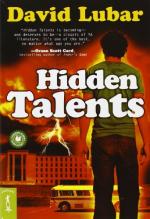 David Lubar
This Study Guide consists of approximately 22 pages of chapter summaries, quotes, character analysis, themes, and more - everything you need to sharpen your knowledge of Hidden Talents.

Hidden Talents is the debut young adult novel by writer David Lubar. In this novel, Martin Anderson arrives at Edgeview Alternative School where he has been sent because he has been thrown out of multiple schools in his home district. Martin immediately makes friends with a group of misfits, each of whom has had discipline problems for reasons they do not fully understand. Martin soon realizes that each of his friends has a special talent that they are unaware of. With Martin's help, each student will learn how to control his talent. Hidden Talents is a novel of bullies, of misfits, and of growing up that will both entertain and inspire its readers.

Martin Anderson arrives at Edgeview Alternative School on a Sunday afternoon after a long bus ride. Martin is unhappy that he has been forced to come to this school and even more saddened that his father seemed almost relieved to be rid of him. Martin meets his new principal, Mr. Davis, and immediately offends him by making comments he cannot seem to control. This has always been Martin's problem with authority figures.

As Mr. Davis leads Martin to his room, someone announces that there is a fire. As Martin watches, the science teacher comes to put out the fire and tries to turn it into a science lesson. Then Mr. Davis introduces Martin to his new roommate, the fire starter himself, Torchie. Martin tries to be nice to Torchie as Torchie kindly gives him a tour of the school, but Martin is unhappy in his new situation and does not care about the rules or anything else.

The first day of classes, Martin runs into the school bully, Bloodbath. Then, as he makes his way from class to class, Martin finds it difficult to control his tongue and ends up saying something offensive to almost all of his teachers. Despite this, Martin finds himself accepted into a group of misfits that includes Torchie, Cheater, Flinch, and Lucky.

As the days pass, Martin falls into a routine. Then, when Torchie convinces the others they can trust him, Martin is invited to join the group on their weekly escape into town. The boys go to a local arcade where Lucky provides quarters he swears he did not steal. Martin finds himself watching his new friends, especially Flinch, and an idea begins to form in Martin's mind. The next day at school, Martin does some research in the school library.

That night, Martin confronts his new friends and tells them what he believes he has discovered. Martin thinks that Flinch is precognizant, that Cheater can read minds, and Torchie is telepyric. Martin tries to explain to each boy why he believes this is true, but they become angry and refuse to listen. The following day, all the boys ignore Martin, pushing him out of their small group. Hence, Martin begins sitting with Trash at lunch, a boy who is something of a loner because things tend to go flying around him. As Martin watches him one day, he sees his fork fly off his tray without Trash ever touching it. It is then that Martin realizes that Trash has a talent as well, that he is telepathic.

When Martin finally convinces his friends of the truth, he also convinces them to take Trash into their group. Martin then begins to help each boy learn how to control his hidden talent. When the boys learn that the school is about to be inspected and might close, they decide to use their talents to help the school pass inspection despite Bloodbath's intent to blow the inspection. The boys are successful in their attempts to stop Bloodbath. However, they learn that the inspectors want to speak to a single student about the school and they have chosen Martin. Afraid that he will not be able to control his mouth, the other boys tell Martin that he has a secret talent as well. The boys tell Martin that he has a way of knowing a person's secret weaknesses and desires. Martin recognizes this gift for the first time and uses it to keep his tongue under control.

The school passes inspection and several changes are implemented on Martin's suggestions. Martin is soon allowed to go home. Martin keeps in touch with his friends, who also are controlling their talents well enough that they may be allowed to go home soon as well.

More summaries and resources for teaching or studying Hidden Talents.