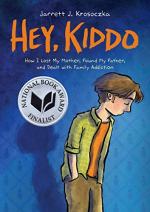 Jarrett J. Krosoczka
This Study Guide consists of approximately 77 pages of chapter summaries, quotes, character analysis, themes, and more - everything you need to sharpen your knowledge of Hey Kiddo.

The following version was used to create this guide: Krosoczka, Jarrett. Hey, Kiddo: How I Lost My Mother, Found My Father, and Dealt with Family Addiction. New York: Graphix, 2018. This young adult graphic memoir is told in into eight chapters, with a Prologue, Author’s note, and A note on the Art. For the purposes of this guide, the memoir is broken into eight sections.

The memoir starts with the Prologue, as Joe and Jarrett drive to the cemetery. The color pallette is very muted - mostly grays, beige, and light orange colors. Joe gives Jarrett some driving lessons, and Jarrett explains how he was raised by his grandparents, his mother is unreliable, and he does not know where his father is.

Chapter 1: Family History starts with explaining how Jarrett’s grandparents met, and eventually married. They had five children, Jarrett’s mother Leslie the second born. He explains how his parents met, and that his father immediately denied Leslie’s pregnancy and how mean Shirley was to Leslie when she found out. When Jarrett was born, however, Shirley immediately fell in love and Chapter 1 ends as a smiling Leslie brings home her new baby.

In Chapter 2, Jarrett describes the first few years of his life, growing up in a house alone with his mother. At first it seemed fine, even idyllic with his mother singing him to sleep. But he draws how often she had strangers over to the house. One day Holly and Lynn came over to take them to Joe and Shirley for Mother’s Day but Leslie is too high to go anywhere. Leslie steals from a mall, and Joe and Shirley have to bail her out. Jarrett also draws a scene of his mother letting strangers into their house who had a knife and were covered in blood. His mother gave them refuge and threw away their bloody clothing. After this, Jarrett moves in with his grandparents, explaining he would not see his mother again for a long time, and his mother signs away parental rights.

In Chapter 3, Jarrett lives with his grandparents full time, and begins preschool. He only sees his mother sporadically, sometimes at Spectrum House where she lives, and sometimes when she shows up randomly. Holly, his aunt, gets pregnant while still in high school but moves out soon after giving birth since she fights constantly with Shirley. Jarrett starts elementary school where he begins to draw more and more. Jarrett makes a new friend, Pat, his next door neighbor. His grandparents get him a hamster named Rusty, though the chapter ends with Rusty's death.

In Chapter 4, Joe takes the family to Disney World where they have a lot of fun. But when they return, Joe tells Jarrett the truth about his mother: that she is a drug addict and he does not see her often because she is in jail. Jarrett explains how Leslie started using drugs at age 13, and would steal to feed her addiction. She even stole her mother’s purse, and wedding ring to sell drugs. She would be gone for days at a time, but getting her her own apartment only made everything worse. She did not use while pregnant though, and after having Jarrett Joe took custody. The chapter ends with Jarrett telling Pat, his best friend, about his mother.

In Chapter 5, Jarrett, now a pre-teen, starts taking art classes at Worcester Art Museum, specifically comic art classes. He loves the classes, and his grandparents even get him a special drafting table and supplies. Jarrett’s mother gets clean, and they go to her job where she works at a Friendly’s restaurant. However, she relapses again. Pat talks Jarrett into the eighth-grade dance. Joe mentions to Jarrett that he ran into his father, but Jarrett says he never wants to meet him. Jarrett graduates from eighth-grade, without his mother in attendance, but his grandparents attend the parent’s dinner which he finally accepts.

In Chapter 6 Jarrett starts high school at Holy Name, but he struggles at first. He is bullied and pushed around. But he loves his art class, and submits a cartoon that is picked up by the local paper. He joins the newspaper team and submits cartoons. He also paints a mural for the school that mocks the mascot. His grandfather talks to him about taking over his factory, but tells Jarrett he can do anything.

Chapter 7 starts with Jarrett explaining to the reader how drawing had evolved in importance for him as a teenager. His mother is out of the rehab center and now has a boyfriend, Miguel, whom she moves in with. Jarrett is wary of him, but Miguel seems friendly and kind. One day Jarrett learns his father’s name by viewing his birth certificate. Later in the chapter, Jarrett goes out with his friends and gets beat up, and his grandfather admonishes him for being out late. He makes his grandparents a portrait that Shirley rejects along with his dream of becoming an artist. Jarrett also begins to grapple with his grandparents age and mortality. The chapter ends as he receives a letter from his biological father, Richard, whom he has never met.

Chapter 8 begins as Jarrett considers the letter from his father and what to do with it. He writes Richard back and learns he has a brother and sister. Jarrett decides to meet his father and his siblings. When Jarrett pulls up, his father immediately apologizes. The kids are friendly and Jarrett feels welcome. He does not get into his dream school - RISD - but he knows he wants to study art somewhere. He graduates from high school, and though his mother is not in the audience, he realizes that he has a loving extended, if non-traditional, family. The memoir ends with a congratulations card from his grandparents, and a handwritten note from his mother apologizing for not attending his graduation.

More summaries and resources for teaching or studying Hey Kiddo.