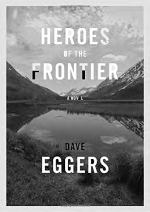 Dave Eggers
This Study Guide consists of approximately 55 pages of chapter summaries, quotes, character analysis, themes, and more - everything you need to sharpen your knowledge of Heroes of the Frontier.

Heroes of the Frontier Summary & Study Guide includes comprehensive information and analysis to help you understand the book. This study guide contains the following sections:

This detailed literature summary also contains Quotes and a Free Quiz on Heroes of the Frontier by Dave Eggers.

The following version of the book was used to create this guide: Eggers, Dave. Heroes of the Frontier. Alfred A. Knopf, a division of Penguin Random House, LLC, 2016.

The story begins with Josie having taken her two young children, Paul and Ana, to Alaska without informing their father, Carl. Josie is fed up with her life back in Ohio and with Carl, who is planning to marry his current girlfriend though he had always refused to marry Josie. Josie has also recently lost her dental practice as the result of a lawsuit. Additionally, Josie feels responsible for the death of a young man named Jeremy who had enlisted in the military after Josie encouraged him to do so. He was killed in the line of duty.

Josie, Paul, and Ana are driving around Alaska in a rented Chateau RV. Josie plans to go visit Sam, whom she refers to as her stepsister. In reality, Josie and Sam grew up together in Sunny’s house after having emancipated themselves.

On the way to Sam’s house, Josie and the children make several stops. One of them leads to them seeing a magic show on a boat after an old fisherman named Charlie invites them. The audience is not impressed by the majority of the magic, so Josie claps more loudly to make up for them. Charlie gets misty-eyed when one act is able to guess where he is from by his postal code.

Josie and the children arrive at Sam’s house. At first, Josie thinks Sam really has her life together since she has beautiful children and her house is organized. However, when Sam takes Josie to a bar and Josie discovers that Sam is having an affair with an elderly man that Josie finds deplorable, Josie rethinks her opinion. She leaves the bar and is pushed off the road by a truck as she is walking to Sam’s house. She wakes up in the hospital and Sam tells her that the hospital called Carl. The next morning Josie takes the children and leaves.

As they are driving, Paul sees a sign for an archery place and Josie stops. It is closed but she allows the children to play and shoot arrows. Another couple, Kyle and Angie, drives up in a truck carrying a small house in the bed. Their children join Paul and Ana in playing. They all stay the night parked in the field. During the night, Kyle bangs on the door and informs Josie they have to evacuate due to a wildfire.

After driving for a long time, Josie finds a bed and breakfast, but the proprietors are not there. The guest cabin is open, so Josie and the children sleep there for the night. When the proprietor does not return, they stay another night, but are awakened during the night by an angry man who goes to the main house to call the police. Josie and the children run to the Chateau and drive away.

Josie next stops at an RV park owned by a handsome man named Jim. A family is having a wedding there. The father of the groom sees Josie watching and invites her and the children to the dance. The next day, Josie and Jim have dinner together. Josie ends up having sex with Jim and Paul catches them. She leaves the RV park feeling ashamed.

Josie drives a meandering path with no destination in mind. She ends up on a road just after a road block that had been set up due to the fires is cleared. One of the tires pops and she stops on the side of the road. A group of men all wearing orange offers to help. After they have fixed the tire, another man approaches and she finds out the men in orange are all inmates.

Josie stops at a diner and invites a man sitting alone to join her. She then figures out that he is there to serve her with papers, so she makes a scene and gets away before he can give them to her. She is sure the papers are from Carl.

Josie finds a silver mine and she and the kinds go there to explore. When they discover the mine is shut down and the caretaker’s cabin is empty, Josie breaks a window and they stay in the cabin for a few days. She and the children are very happy there. One day they go into town for food and Josie meets a group of musicians. She asks one of them, Cooper, to help her write down some of the music that is in her head. While she and the children are at Cooper’s house, the town is evacuated. Josie and the children end up at a shelter in a school.

The people at the shelter give Josie the opportunity to make a phone call, so she calls Carl. Carl did not serve her the papers and he is not angry at her. The papers were from a class action lawsuit against a power company that Josie was involved in.

Josie takes the children for a walk and they decide to go see a mountain lake. It begins to storm and the lightning is dangerous. Josie and the children run on toward a shelter by the lake. They finally arrive and find that the shelter there has been set up for a party that never happened. They eat some of the food and let their clothing dry. Josie has the feeling that she is finally right where she belongs.

More summaries and resources for teaching or studying Heroes of the Frontier.

Heroes of the Frontier from BookRags. (c)2022 BookRags, Inc. All rights reserved.