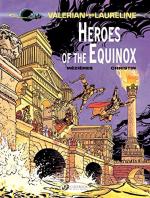 Heroes of the Equinox (Valerian) Summary & Study Guide includes comprehensive information and analysis to help you understand the book. This study guide contains the following sections:

This detailed literature summary also contains Quotes and a Free Quiz on Heroes of the Equinox (Valerian) by Pierre Christin.

NOTE: Citations for this Study Guide are based on the following version of the book: Mezieres, J.C.; Christin, P.; Tranle, E. Valerian and Laureline: Heroes of the Equinox; Cinebook, Cantebury, Kent, 1978. Kindle AZW file.

In the graphic novel Heroes of the Equinox, Valerian and Laureline are agents with the Spatio-Temporal Agency, an Earth-based organization charged with an array of duties and missions. In this situation, Valerian has been chosen to represent Earth in a contest on the planet Simlane. Valerian and Laureline arrive to find a delegation waiting for them. The members of this delegation explain that the contestants will cross a body of water to arrive at Filene, the Island of Children. There, the contestants will climb a mountain before they face their final challenge.

The inhabitants of Simlane are barren, but every "hundred equinoxes," the Simlane heroes travel to Filene and a group of children arrive a short time later (8). The people of Simlane do not know what happens on Filene, only that a hero makes it successfully to the finish and a group of children who look like that hero arrives in Simlane a short time later. The successful hero never returns. This cycle, however, has passed without a hero successfully making it through the challenge. Now, the Simlane people are too old to possibly succeed.

Valerian and three other heroes have been invited to participate in the challenge. Irmgaal is a warrior from the planet Krahan. Ortzog is from the industrial planet Boornyof, and carries chains that represent an elimination of servitude. Blimflim is from Malamum, and he believes in peace and harmony. All three are much larger than Valerian and have strong opinions about what is right.

The other three heroes show their power, destroying parts of the already crumbling Simlane. Valerian does not have a true superpower, but he shows off his marksmanship. Valerian really does not know what his purpose is, or what is expected of him, but he believes that he should represent his home planet of Earth to the best of his ability. Toward that end, he sets out with the others. They take to the air to cross the water, with Valerian using his jetpack to navigate.

They reach the island of Filene and discover they have to cross grueling countryside. Valerian winds up falling and spends a lot of time wandering through a crevasse in the mountain. The other three arrive at their destination before Valerian. A man greets them and asks each what he envisions for the future generation of the Simlane people, if he is chosen as the father of the next generation. Each offers their hope that this generation will mimic the heroes' home planets. Irmgaal wants the next generation to be warriors, unafraid and anxious to become space explorers. Ortzog imagines a race of people who focus on increased productivity in industry and agriculture, and who form alliances with worthy people from other planets. Blimflim hopes the next generation will focus on meditation and inner peace.

Valerian arrives after the others have given their answers. When the man asks Valerian the question, he is still dazed from his time in the cave. He says that he would prefer that the next generation of people choose for themselves how to live.

The next morning, the man arrives and announces that the Great Mother has chosen Valerian as the man who will father her children. She explains that they will mate, and she will then give birth to many, already developed as children.

A whirlwind arrives and carries the other three heroes back to Simlane. Laureline becomes worried about Valerian and crosses the water, then scales the mountain, ending in the correct place in a very short amount of time. Just as she arrives, many children rush out of the huge palace. Laureline soon discovers Valerian and the other heroes who had successfully mated with the Great Mother. Each is fully intact, but is tiny. The Great Mother grants permission for Laureline to take Valerian away with her. Laureline carries him in a pouch around her neck but she is obviously furious that he went through with having sex with the Great Mother. Aboard their ship, Valerian suggests she could contact their doctors to see if anything can be done to return him to his natural size.