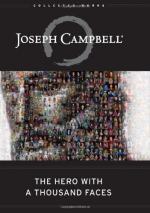 The Hero with a Thousand Faces Summary & Study Guide

Joseph Campbell
This Study Guide consists of approximately 57 pages of chapter summaries, quotes, character analysis, themes, and more - everything you need to sharpen your knowledge of The Hero with a Thousand Faces.

The Hero with a Thousand Faces Summary & Study Guide Description

The Hero with a Thousand Faces Summary & Study Guide includes comprehensive information and analysis to help you understand the book. This study guide contains the following sections:

This detailed literature summary also contains Topics for Discussion and a Free Quiz on The Hero with a Thousand Faces by Joseph Campbell.

This book, published in the late 1940s, is an enlightening evocation of the power of myth and meaning to transcend time, place, culture, gender and spiritual perspective. The author, a noted mythologist whom some would call a philosopher, uses the archetypal story of the adventurous hero's journey as a springboard to explore essential human truths. As part of that exploration, the author develops themes relating to the universality of human experience, the nature of duality and harmony, and the function of symbolism in both story and life.

The book begins with a prologue, in which the author, noted mythologist Joseph Campbell, outlines both his core theory and the literary/analytical process he uses in the book to illuminate it. That theory is that there are three central truths at the core of the spiritual and psychological belief systems of all cultures in all times and in all places: that there is a spiritual world existing in parallel with the physical; that the ultimate goal of physical existence is to connect with that spiritual world; and that truth is both explored and defined through the universal human experience of myth. Campbell also indicates in the prologue that the purpose of the book is to explore the nature of that spiritual world, the ways in which it manifests in the physical world, and the ways in which myth illuminates those manifestations.

One of the main ways this happens, according to Campbell, is in the narrative of the Hero's Journey - the story of a mystically, physically powerful individual on a physical quest to retrieve some object or person, a story that is in fact a mythic, symbolic metaphor for the spiritual quest for union (re-union) with the spiritual. The main body of the book is made up of Campbell's detailed analysis of the various stages of the Hero's Quest, the various stages of his journey. A key component of this analysis is Campbell's cross-referencing of different myths of different cultures and historical eras, which clearly demonstrate the parallels between them - parallels that, Campbell contends, prove that the human experience is universal. Another component of this analysis is the way in which Campbell quotes at length from those different myths - he not only says that there are parallels, he demonstrates it by including stories (from socio-cultural experiences as broadly ranging Christianity, Buddhism, Ancient Greek, Native American, and Eskimo).

Campbell describes in detail each stage of the archetypal Hero's Journey, reiterating at several points that the archetype has both a clear basis and a clear echo in the actual living existence of each human being. These spiritual echoes are awakened by metaphor, the various uses of which Campbell also describes in detail. The ultimate purpose of both myth and metaphor, Campbell maintains, is to awaken in each individual human being an awareness of the spiritual aspect of life. This awakening, Campbell maintains, is the first step in the necessary journey away from resistance to the various inevitable physical and spiritual truths associated with being human (i.e., death and suffering) and toward an embracing of them as part of the universal progression towards enlightenment - living union with the world of the spirit.

At the book's conclusion, Campbell makes the clear statement that contemporary culture in general, and western culture in particular, have over the years moved further and further away from the self-understanding and self awareness to be found in myth. The human experience, he maintains, has become shallower and more superficial, becoming less and less what myth suggests it was intended to be - a true experience of harmony between the physical (that which we can touch, see, smell, hear and taste), and the spiritual (that which, through myth and symbol, we intuitively, psychologically and instinctively feel).

More summaries and resources for teaching or studying The Hero with a Thousand Faces.

The Hero with a Thousand Faces from BookRags. (c)2022 BookRags, Inc. All rights reserved.