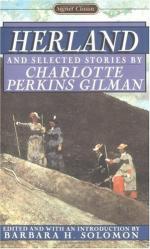 Herland was initially published in serial form, in 1915, in Charlotte Perkins Gilman's monthly magazine, The Forerunner. Rescued from obscurity by Ann J. Lane, the story was published in book form for the first time in 1979. An introduction by Lane sets the tone for this feminist utopia created by Perkins Gilman. Herland tells the tale of three adventurers who stumble onto an isolated, all-female land. Determined to keep their discovery secret until they have conquered the undiscovered country, Vandyck Jennings, Terry Nicholson and Jeff Margrave plan an expedition to Herland.

Vandyck, a sociologist, who presents the group's findings in a scholarly fashion, tells the story. Vandyck's narrative places their discovery within the context of then-current sociological beliefs regarding female potential. In the Victorian era in which the story takes place, the male-dominated American society views women as subordinate beings, wholly lacking in the skills required to form a functional society. Vandyck's beliefs that women are incapable of organization, cooperation, work specialization, as well as scientific and mathematical understanding are challenged by Herland society.

While Vandyck represents the scientific viewpoint, Jeff is the romantic who believes that women should be idolized and kept on pedestals. Terry's character is the least enlightened of the three; his macho perspective is firmly engrained and, of the three friends, Terry is least likely to open his mind to the wonders of Herland. The land is wondrous indeed. The women of Herland, isolated without male influence for two thousand years, have developed and maintained a smoothly operational society that puts American innovation to shame. The women have developed the capacity for virgin birth and population control. They develop their land fully and cultivate enough food to easily support their population of three million. Warfare is unnecessary as there are no men to fight, but the women are quite capable of defending themselves.

When the three explorers arrive by means of a biplane, the women overpower them and keep them captive in an ancient fortress at the edge of the cliff, which surrounds Herland. The captivity is by all means pleasant, reports Vandyck. The women treat them well and set about teaching them the language, history, and culture of Herland. Motherhood is the ethos that permeates the land; and every social, political, financial, religious, and personal decision is weighed against the effects it may have on the nation's all-female children. Once the men have been suitably trained and tamed, they are allowed to wander freely through the land and are encouraged to give lectures to young female students about American civilization.

The men eventually court and marry three residents of Herland, Ellador, Celis, and Alima. The men's expectations of marriage are vastly different from the reality and a difficult period of adjustment ensues. Vandyck and Jeff both learn to see women as people, not objects to be dominated. Thus their marriages cohere effectively. The women are initiated into the reproductive process with mixed results. Celis becomes pregnant to the joy of the entire nation. This new form of motherhood represents a Great New Hope to the formerly all-female populace. However, Vandyck's wife, Ellador, teaches Vandyck that sexual relations are a form of gluttony and should only be engaged in with the intent of procreating. Vandyck struggles with this limitation, yet ultimately he comes to agree wholeheartedly that sex is superfluous to a loving marriage. Yet Terry insists on mastering his wife, Alima, and ultimately his attempts to sexually coerce her result in his banishment. Eager to see the outside world, Ellador agrees to accompany Vandyck as Vandyck escorts the banished Terry out of Herland. Author Gilman picks up the storyline of Ellador and Vandyck in America in her sequel, With Her in Ourland.