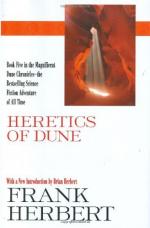 This detailed literature summary also contains Topics for Discussion and a Free Quiz on Heretics of Dune by Frank Herbert.

Heretics of Dune tells of life 3,500 years after the death of the Tyrant, Leto II, as ferocious "Honored Matres" stream in from the "Scattering," and the Bene Gesserit work to unite a ghola, Duncan Idaho, and a Fremen girl, Sheeana, who has the power to command worms. The Tleilaxu, who have been hiding for millennia behind self-built walls, are ready to claim their place in the universe, aided by a document prepared by the Sisterhood. Ancient Dune - Rakis - is destroyed and a lone worm is rescued to begin a new cycle on Chapter House Planet.

Some 3,500 years after the death of the Tyrant, Leto II, the Bene Gesserit Sisterhood is preparing a new ghola of Duncan Idaho on Gammu and on Rakis, the Sisterhood is watching a young girl, who can command worms. An unorthodox offshoot, the "Honored Matres," is returning violently from the "Scattering," and the situation is so dire that Reverend Mother Superior Taraza travels personally to bring Bashar Miles Teg back from retirement to train and protect Duncan. Meanwhile, on Bandalong, cradle of Tleilaxu civilization, Tylwyth Waff, proposes using the "Atreides Manifesto" to restore humankind to the true faith, which the Tleilaxu alone preserve.

The Reverend Mother Lucilla, an Imprinter, is sent to Gammu to train Duncan but quarrels with the local commander, Schwangyu, who fears a new Kwisatz Haderach. Taraza and Darwi Odrade allow themselves to be captured by Honored Matres and brought to Gammu, where Teg is prepared to blow them up rather than surrender. On Rakis, Sheeana becomes the stuff of legends and creates a rift in the priesthood, which ends in Stiros trying to kill Sheeana. Odrade begins her Bene Gesserit training, captures Waff and convinces him that the Sisterhood shares the Great Belief and wants an alliance. On Gamma, Schwangyu sells out to the Tleilaxu, forcing Teg to take Duncan and Lucilla to refuge in a no-chamber, where Duncan resists Lucilla's advances, forcing Teg to awaken pre-ghola memories prematurely. On Rakis, the High Priest Tuek is assassinated and replaced by a Face Dancer, creating a fragile alliance among the Sisterhood, priesthood and Tleilaxu. Brought to wits' end, Taraza sends Burzmali to bring the refugees to Rakis, where Leto II's vast horde of melange is finally discovered, and Odrade reads troubling inscriptions left by the Tyrant. She admits authorship of the "Atreides Manifesto" and commits the Sisterhood to a partnership. Taraza hurries to Rakis to investigate possible treason.

On Gammu, the refugees emerge and are attacked by Face Dancers, but Burzmali spirits Duncan and Lucilla away, while Teg falls into the Honored Matres' hands. He is tortured with such intensity that his physical reactions are sped up, escapes and rallies former comrades for a mission on Rakis. An Honored Matre acolyte, Murbella, captures Duncan and "marks" him, and then finds Lucilla and Burzmali and brings them to watch Duncan's further subjugation. Duncan, however, has learned all the sexual mysteries and turns the tables on her. The Honored Matres attack the Sisterhood Keep on Rakis, killing Taraza. Odrade takes Sheeana into the desert to meet Duncan and Lucilla, brought by Teg, who remains behind as they and a lone worm are flown to safety on Chapter House Planet. There the new Reverend Mother Superior, Odrade, sets out to complete her plans to turn the planet into a new Dune, facing opposition within the Sisterhood and fearing accidental discovery by the enraged Honored Matres.