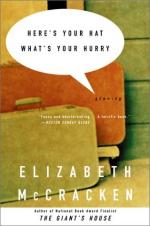 Elizabeth McCracken
This Study Guide consists of approximately 25 pages of chapter summaries, quotes, character analysis, themes, and more - everything you need to sharpen your knowledge of Here's Your Hat What's Your Hurry.

Aunt Helen Beck is an elderly woman who has never owned a home. Throughout her long life—at the time of this story, she is in her eighties—she has traveled the country, staying with people to whom she says she is related. Generations of people have grown up believing that she is their aunt. None of these presumed relatives has ever called her anything other than “Aunt Helen Beck.”

In truth, she has no known relatives. When she was sixteen and homeless, she went to visit a child preacher who had once toured through her town, named Georgie Beck. She established a bond with him and nursed him when he was ill. When Georgie died, she kept his last name and began the practice of presenting herself at the homes of strangers, claiming to be a distant relative.

More summaries and resources for teaching or studying Here's Your Hat What's Your Hurry.