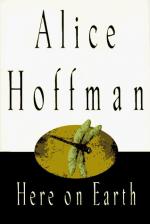 Alice Hoffman
This Study Guide consists of approximately 33 pages of chapter summaries, quotes, character analysis, themes, and more - everything you need to sharpen your knowledge of Here on Earth.

This detailed literature summary also contains Topics for Discussion and a Free Quiz on Here on Earth by Alice Hoffman.

Here on Earth is an unforgettable novel by writer Alice Hoffman. In this novel, March Murray returns to her hometown after a nineteen year absence to bury the woman who was her surrogate mother. March intends to only remain for a few days, but those days turn into months when March is drawn back into an obsession she thought had ended more than twenty years before. Here on Earth is a novel about obsession, about pain, and about the devastation one person can bring upon on the people he loves.

March and her daughter, Gwen, return to March's hometown to bury Judith Dale, the housekeeper who was a surrogate mother to March after her own mother's death. March is haunted by the past from the moment she arrives. Inside her father's old house, March finds memories in every corner of the boy she once loved. Hollis was a street urchin, brought home by March's father when she was only eleven. From the first moment she saw him, March claimed the boy as her own.

Hollis' arrival in the Murray home was not accepted by everyone. Alan Murray, March's older and lazier brother, resented the attention paid to Hollis by his father. One day Alan and his friend ambush Hollis, beating him and leaving him tied to a tree. When March finds him, Hollis cuts himself in an attempt to make the attack seem worse than it was. This causes Henry Murray to threaten Alan's very existence in the household. It also opens Hollis to March, the only person he will ever trust.

Over time, Hollis and March become inseparable, often spying on the neighbors and envying their wealth and their belongings. After Henry's untimely death, March and Hollis become lovers, promising to one another there will never be another. However, at the same time Alan gives Hollis an invoice of all he owes the Murray family for their generosity. Hollis pays the bill quickly and then leaves, hoping to find his fortune in Florida.

March waits for Hollis for three years, watching for him from the window in her bedroom. At the same time, Richard Cooper begins courting March. Richard knows that March is in love with Hollis, but hopes she will see past this to realize how good Richard can be for her. Eventually March gives in and moves to California where she and Richard marry. While pregnant with her only child, March learns that Hollis has returned to Jenkintown. March begins calling him, whispering her love for him over the phone lines. However, when Hollis pressures her to leave Richard, she refuses for the sake of her child.

Now, more than fifteen years later, March finds herself unable to forget Hollis. Hollis still lives in Jenkintown, the owner of the farm they once admired and envied. Hollis has bought up most of Jenkintown, throwing around his great wealth to garner the respect he felt he never had as a child. However, Hollis still feels empty, as though he still does not own enough.

Gwen, March's daughter, begins stealing rides on Hollis' racehorse, Tarot. Hollis allows this to continue in hopes that it will draw March to him. March continuously puts off her departure, thinking more and more of Hollis. Finally they meet and March finds herself in his bed. They become obsessed with one another and March begins to neglect the simple things in her life. Susie, March's childhood friend, is concerned about March's behavior and begins investigating Hollis's past. Many people in town are convinced Hollis is responsible for his wife's death, though they cannot prove it. However, many can testify to injuries that make it clear Hollis was beating his first wife.

March allows Hollis to take over her life, to control everything in and out of bed. They move in together, making it easier for March to neglect her life. Gwen, however, is growing more and more frightened of Hollis. Gwen plans to leave as soon as Hollis gives her the ownership papers for Tarot. However, Hollis takes back the promise he made to her and refuses to give her Tarot. In fact, Hollis threatens to shoot Tarot when Gwen disobeys his orders to never bring strangers to Guardian Farm. The horse goes to Alan, who has become a drunk in the marsh. Gwen goes back to California, leaving her mother alone with Hollis.

On New Year's Eve, March attends a party at Susie's house, only to be dragged away by an unhappy Hollis. Hollis breaks a car window in his attempt to convince March that she never should have left the house without his permission. At home, March realizes that the boy she once loved is no longer a part of the man Hollis has become. March sneaks out of the house and returns to California. The following morning, Hollis rushes to stop her and crashes his car on a dangerous turn in the road in front of his house.

More summaries and resources for teaching or studying Here on Earth.