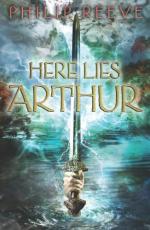 Philip Reeve
This Study Guide consists of approximately 30 pages of chapter summaries, quotes, character analysis, themes, and more - everything you need to sharpen your knowledge of Here Lies Arthur.

Gwyna is a young orphan girl who survives a devastating raid on her community by Arthur. Because she can swim, the bard Myrdden enlists her aid in a piece of charlatanry by having her deliver a sword to Arthur in a manner that leaves Arthur and the other onlookers believing she was the mythical Pagan goddess, Lady of the Lake. Myrdden then adopts her as his own and spends several years teaching her his craft. In order to take her along in a war band of men, Myrdden disguises the adolescent girl as the boy Gwyn. When Gwyna reaches puberty, Myrdden takes her away on a long and solitary trip—when they return, she is presented as Gwyna, the half-sister of Gwyn. Her appearance as a young woman is accepted by all and she spends the next few years as a lady-in-waiting to Arthur's wife Gwenhwyfar. During this time Gwyna develops an attraction for Peredur, a well-meaning but completely incompetent warrior who follows Arthur. Ironically, Peredur had been raised as a girl by his over-protective mother who feared he would follow in his father's and brothers' footsteps by becoming a warrior. When Arthur discovers the love-affair between Gwenhwyfar and one of his young warriors he flies into a rage and kills both of them. The warrior's brother, Medrawt, flees the city and raises an army in opposition to Arthur who has become something of a boorish tyrant. Meanwhile, Arthur fears his brother Cei as a potential rival and arranges to have Cei ambushed and killed. Arthur sends with Cei all his less-devoted men in a grand scheme of cleaning house. When Gwyna discovers one of the ill-fated warriors is Peredur she sets off in pursuit and eventually rescues him from the ambush and death. She then returns to Myrdden's house and finds him stricken and near death; after sitting with him until he passes she learns that Arthur and Medrawt have met on the field of battle and slain each other. Having had enough of the life of a woman, Gwyna again cuts her hair and shifts her clothes, taking to the road with her now boyfriend Peredur and trusting to her own storytelling abilities to feed them on their further adventures.