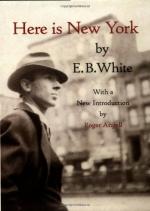 E. B. White
This Study Guide consists of approximately 17 pages of chapter summaries, quotes, character analysis, themes, and more - everything you need to sharpen your knowledge of Here Is New York.

This detailed literature summary also contains Topics for Discussion and a Free Quiz on Here Is New York by E. B. White.

E. B. White's book is given an introduction by his stepson, Roger Angell, describing the circumstances preceding the writing of "Here is New York" and what he believes would be White's reaction to the city at a more modern day. Angell states that he thinks that a lot of the reason that White decided to come to New York from his home in Maine and write the piece for the New York magazine, Holiday, had to do with the fact that Roger worked there and White wanted to help him out.

White starts out explaining to the reader that it is impossible for the book to be current when it's printed because New York is an ever changing place but at the same time a place that never changes. E. B. describes New York and the ability to be close to so much and so separated from it all at the same time. He also takes time to explain to the reader the amount of people in the city and the different ethnic, and religious aspects that all those people bring. E. B. states at one point "It is a miracle that New York works at all." referring to the fact that there is so much in such a small area.

He describes that nothing is like New York because it is the loftiest cities. E. B. has a lot to say about New York that is positive, but a lot to say about the city that makes it sound like there are a lot of problems It becomes unclear what his stance is on the city in its current position until the reader gets to the last of the story. E. B. stands by New York and the belief that this city is capable of leaving it's citizens with something more than any city in the world can give. E. B. states that New York has a way of giving it's citizens the feeling of belonging to something great. A whole world contained inside one city. It becomes clear to the reader that the city of New York holds a special place in his heart although he does state that it is a place to visit but not a place to live.

More summaries and resources for teaching or studying Here Is New York.