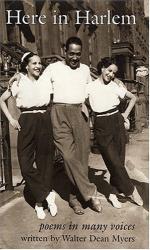 Introduction & Overview of Here in Harlem

Walted Dean Myers
This Study Guide consists of approximately 36 pages of chapter summaries, quotes, character analysis, themes, and more - everything you need to sharpen your knowledge of Here in Harlem.

Walter Dean Myers is an accomplished and prolific writer of poetry, fiction, and nonfiction for young adults. Most of his prize-winning works explore the experiences of urban youth. Myers often turns to Harlem, his hometown, as a source of inspiration and as a setting for his novels and his poetry. In 1997, he published Harlem, a picture book of poetry illustrated by his son Christopher. The book focused on the representative historical journey of many African Americans from Africa to the southern United States, and then north to Harlem.

Here in Harlem: A Poem in Many Voices was published in 2004. It is a collection of fifty-four poems written from the different perspectives of various Harlem residents, each identified by name, age, and occupation. The characters include teachers, ministers, soldiers, students, and an undertaker. Each poem is a snapshot of a particular character's life, told in that character's distinctive voice. Together, the voices reflect the community of Harlem, which in the 1930s and 1940s was the epicenter of African American culture. References to historical figures, such as singer Billie Holliday, writer Langston Hughes, and boxer Joe Louis, appear throughout the poems of Here in Harlem. The poems are illustrated with snapshots from Myers's personal collection of over 10,000 antique photographs and other historical documents.

In the introduction of Here in Harlem, Myers credits the 1915 book Spoon River Anthology by Edgar Lee Masters as his inspiration. In Masters's collection of some 200 poems, the characters are ghosts who deliver poetic monologues in a fictional Midwestern cemetery. Masters's book became an international popular and critical success. By using the same multi-voiced storytelling technique in Here in Harlem, Myers pays homage to an American classic while recounting the history and culture of his own community.

More summaries and resources for teaching or studying Here in Harlem.