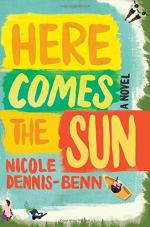 Nicole Dennis-Benn
This Study Guide consists of approximately 68 pages of chapter summaries, quotes, character analysis, themes, and more - everything you need to sharpen your knowledge of Here Comes the Sun.

This detailed literature summary also contains Quotes and a Free Quiz on Here Comes the Sun by Nicole Dennis-Benn.

NOTE: All citations in this Study Guide refer to the following version of this book: Dennis-Benn, Nicole. Here Comes the Sun. Liveright Publishing Corporation, 2016.

Ambition and desperation make a disastrous combination for Margot when she is willing to do whatever it takes to get a position as a hotel manager in the novel Here Comes the Sun by Nicole Dennis-Benn. Margot reasons she is doing the things she is in order to make a better life for her sister, Thandi. She intends for Thandi to pay her back for all her hard work once Thandi becomes a doctor. Thandi, however, is unhappy at the private school she attends. She wants to draw, not be a doctor. Margot and Thandi’s dreams collide when construction on the hotel Margot intends to manage is halted because of a murder. Thandi’s boyfriend, Charles, had confronted the man who raped Thandi years prior causing his death. When Thandi tries to beg forgiveness for Charles, she learns what Margot has been doing to fund Thandi’s schooling.

By day, Margot works as a head desk clerk at the luxurious Palm Star Resort. By night, she works her own business as a prostitute for the rich men who visit the resort. Margot’s mother, Delores, also works hard selling keepsakes to tourists. Margot and Delores both holds onto the hope that Thandi will save the family from the desperate poverty in which they live when she becomes a doctor.

Thandi, however, does not see herself as a doctor. Even though she makes good grades, she enjoys only her art class and wishes her family understood her love of art. In her hopes of fitting in with her rich schoolmates, Thandi visits Miss Ruby for bleaching treatments. She believes lighter skin will make her more acceptable. Instead, she meets a poor boy who tells her she is pretty just the way she is. As Thandi struggles to discover her own identity, she also harbors a secret. Clover, a handyman in the area raped her when she was only a child.

Margot, meanwhile, agrees to take charge of a ring of prostitutes at the hotel where she works. Alphonso, her boss, discovered Margot’s after hours business and demands to be part of it. Margot does as Alphonso wants, but when Alphonso refuses to make Margot the manager of his hotel, she sets up the new manager, a former Miss Universe, to be caught in bed with another woman.

Even though both her sister and mother have warned Thandi not to get involved with boys, Thandi begins a relationship with Charles, a common boy in her neighborhood. When Thandi has a flashback to her rape and attacks Charles when he tries to have sex with her the first time she tells him about her rape. Charles seeks out Clover in order to make him pay for what he did to Thandi. The fight triggers a fatal heart attack in Clover. Charles is accused of Clover’s death and a reward is offered for his capture.

Jullette, Charles’ sister, comes up with a plan for Thandi to seduce Alphonso and ask that the charges be dropped against Charles. It is while working with Jullette on this plan that Thandi learns that her sister not only has worked as a prostitute but also that she taught and supervised other prostitutes. Thandi additionally learns that her sister is the one who suggested the reward for Charles’ capture.

In the final scene of the novel, Margot is living by herself in the beachfront villa she always dreamed she would own. She has achieved her idea of success but has lost everyone important to her, including her sister, in the process.

More summaries and resources for teaching or studying Here Comes the Sun.