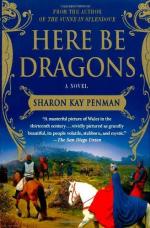 Sharon Kay Penman
This Study Guide consists of approximately 58 pages of chapter summaries, quotes, character analysis, themes, and more - everything you need to sharpen your knowledge of Here Be Dragons.

This detailed literature summary also contains Topics for Discussion and a Free Quiz on Here Be Dragons by Sharon Kay Penman.

Here Be Dragons is the first in a trilogy of historical novels about thirteenth century England and Wales by Sharon Kay Penman. This novel follows the unique love story of Llewelyn ab Iowerth, Prince of Gwynedd, and the illegitimate daughter of King John of England. The marriage is arranged by King John in the hopes of taking Llewelyn as an ally. However, the marriage is less than a year old when old tensions begin to explode between Llewelyn's Wales and John's England. Joanna finds herself stuck in the middle of two men she loves, struggling to decide where her loyalties should lie. Here Be Dragons is history brought to life, filled with romance, mystery, and intrigue that will keep even the history phobic glued to the page.

Llewelyn is the son of a prince and fiercely patriotic to his country. However, Llewelyn is taken out of his native Wales to live in England when his mother marries an English nobleman. This time away from Wales only increases Llewelyn's love for his homeland, increasing his resolve to regain his father's lands and the title that should have been his. At the age of fourteen, Llewelyn raises an army with the help of an uncle. Before Llewelyn is thirty he regains control of all of Gwynedd, the northern region of Wales. At the same time, Prince John is scheming to steal the English crown from his brother. John nearly loses everything after one of his schemes, but makes up with his brother and wins his favor by showing his loyalty. With patience, John wins his heart's desire, being named Richard's heir on Richard's death bed.

While these two men are fighting to gain the power they desire, a little girl is growing up in the shadow of her mother's despair. Joanna is the illegitimate daughter of a noblewoman who lives in shame in an isolated village. Joanna's mother dies after news of her father's death drives her over the edge of despair. Joanna is then given to her father, Prince John of England. John raises Joanna as though she were his child in wedlock, proud to embrace his only daughter where other men might have been ashamed to acknowledge her very existence.

When Joanna is fourteen, King John arranges for her to marry Llewelyn, Prince of Gwynedd, in the hopes of achieving a truce with Wales. Joanna is frightened by the idea of marrying a man she has never met and moving to a foreign country. Although Llewelyn appears to be kind, Joanna is miserable her first few months of marriage because she does not understand the language of her new country, Llewelyn's people see her as an outsider, and Llewelyn's children refuse to accept her. On top of this, Joanna finds herself falling in love with her husband, but is unsure how to tell him. Joanna follows advice of her stepmother only to walk into Llewelyn's bedchamber and discover him in bed with his mistress. Joanna is devastated, afraid of her husband's wrath. However, this fear does not stop her from retaliating by ordering Llewelyn's men to burn his bed.

What should have resulted in an irreparable rift between Llewelyn and Joanna actually brings them closer together. Within two years, Joanna delivers two children, a daughter, Elen, and son, Davydd. A blissful time in Joanna's life is marred by Llewelyn's son, Gruffydd's refusal to accept Joanna and the growing tensions between Llewelyn and John. All these tensions come to a head when John invades Wales, forcing Llewelyn to surrender. Joanna goes to John and arranges the surrender for Llewelyn. As a condition of his surrender, however, John insists that Llewelyn hand pick thirty hostages for John to hold, including Gruffydd.

Gruffydd's captivity is pleasant at first. Gruffydd is allowed a moderate amount of freedom, carousing with his friends and fellow hostages. However, when Llewelyn takes advantage of a strategic move that could help him take control of a larger portion of Wales, Llewelyn acts on it despite his truce with John. John becomes enraged and orders the hanging of all his Welsh hostages. Gruffydd is to be last. Before it is Gruffydd's turn, John receives a letter from Joanna informing him of a plot among several of his noblemen to assassinate John the moment he crosses the border into Wales. John spares Gruffydd's life to reward Joanna for her loyalty. However, John continues to hold Gruffydd for many more years.

Upon learning the news of the deaths of the Welsh hostages, Llewelyn tells Joanna some truths about John from which he had been shielding her. One of these was that John had Maude de Braose imprisoned and starved to death. Joanna also learns that John ordered the hanging of a son of a Welsh Prince, even though the child was not yet seven. These truths haunt Joanna, causing her to doubt her blind faith in the father she has always loved. Joanna runs away, hiding in England while she attempts to find a way to face Llewelyn. Llewelyn comes to Joanna and tells her that he loves her enough to continue in their marriage, but insists that she end her loyalty to her father. Joanna agrees, refusing to see her father again.

John struggles for the next few years, finding himself embroiled in a war with his own barons. The war ends with John signing a historic charter, the Runnymede Charter, that outlines the rights of the citizens of England. This charter also frees Gruffydd. Finally, the charter creates a committee of citizens who are given the task of governing the king. John dislikes the charter and applies to the Pope to overrule it. The Pope does as John requests, returning to John the bulk of his power. Not long afterward, John contracts an illness that kills him, leaving his nine-year-old son, Henry, king.

As relations between Wales and England improve under Henry's reign, Joanna and Llewelyn's private life begins to fall apart. Gruffydd is outraged when his father announces that he intends to make Davydd his sole heir despite the more liberal inheritance laws of Wales. Joanna becomes concerned that Gruffydd will kill Davydd in his attempt to recapture what should rightfully be his. Joanna concocts a scheme to force Llewelyn to exile Gruffydd, a scheme that works so well Llewelyn finds himself forced to imprison his eldest son. Llewelyn disapproves of Joanna's methods, causing tension in their relationship. Before they can make up, Llewelyn goes off to battle.

Llewelyn takes William de Braose, the grandson of Maude de Braose, hostage during his battles and sends him to stay at his court where Joanna is. Joanna is uncomfortable among any de Braose, but especially William because of an advance he made toward her at her daughter's wedding. William seeks Joanna out until she finds herself forced into a conversation with him about her father. Joanna is heartbroken by William's grief and allows him to seduce her. William and Joanna have a week long affair that Joanna ends out of ear of discovery by Llewelyn. However, William continues to pursue Joanna until the night he is discovered in Joanna's bedchamber. William is hung and Joanna is imprisoned in one of Llewelyn's seaside castles.

Llewelyn could have had Joanna killed or divorced her, but instead does nothing. Llewelyn cannot stop thinking about Joanna and their more than twenty years of marriage. Eventually Llewelyn goes to Joanna and asks to be told the truth about her relationship with William. When Llewelyn learns that Joanna ended the affair and that she indulged in the affair because of her sense of betrayal in regards to her father, Llewelyn forgives her. Llewelyn takes Joanna back into his life despite the shock and disapproval of his people and family members. Llewelyn loves Joanna and their love has survived every obstacle life has put in their way.

More summaries and resources for teaching or studying Here Be Dragons.