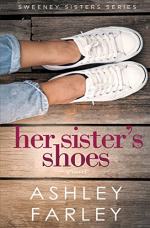 Ashley Farley
This Study Guide consists of approximately 64 pages of chapter summaries, quotes, character analysis, themes, and more - everything you need to sharpen your knowledge of Her Sister's Shoes.

This detailed literature summary also contains Quotes and a Free Quiz on Her Sister's Shoes by Ashley Farley.

Oscar and Lovie Sweeney opened Captain Sweeney's Seafood Market in 1959 in Prospect, South Carolina. As the novel opens, their daughters, Sam, Faith, and Jackie, are working on the final touches of a major renovation project to the business. Oscar has been dead for several years. However, at 83, Lovie is still the owner of the business. Faith is the bookkeeper for the business while Sam is the manager, handling the daily decisions and keeping the business stocked. Jackie, the wife of a prominent surgeon, is an interior designer. Faith and Sam are struggling to get the business reopened after termites prompt renovations. The renovations have changed the look of the market. It is stocked with fresh seafood from fishermen who dock directly across the street. The market is a booming business during the summer months when out of town visitors flock to the ocean. The family knows that they have to also retain the local customers who keep the business viable during the off season.

Sam is a single mother. Her son, Jamie, was driving an ATV when he had a wreck. Jamie's best friend was killed, and Jamie has been in a wheelchair since then. Doctors say he is physically healed and should be walking by now. Jamie is sullen and angry, as he has trouble dealing with his grief and guilt. Sam believes she has to be the strength of the family. However, when everyone else is dealing with a series of crises, Sam feels the weight of her responsibility to the family. She turns to alcohol until she has a wake-up call that makes her turn her focus back on her family.

Jackie is the oldest of the three sisters. She is married to a successful cardiologist, Bill, and the mother of twins teenagers, Sean and Cooper. Jackie has spent most of her life letting other people take care of her sons while she pursued a career and fed her need for social interactions. When Bill has an affair, Jackie has no intention to resolve their situation. She only wants to get Bill's money, and she goes so far as to wipe out their joint account to buy herself a new Cadillac Escalade. When Cooper is hurt in an accident, Jackie is forced to face some truths about her life. She has never tried to be a presence in her sons' lives and shares the blame for her failed marriage. With this realization, Jackie knows that must make changes, and she sets out to do exactly that.

Faith is the youngest of the sisters. She is married to Curtis, a biker who is not able to hold a job and who has no interest in being a good husband or father. Faith makes excuses for Curtis's lack of income and his attitude until she discovers that he is leaving their six-year-old daughter, Bitsy, at home alone. Eventually, Curtis becomes violent with Faith, breaking her nose and some ribs. Sam insists that Faith move out. Faith does, though she hates that she is putting her entire family in danger. However, Jamie realizes that his family needs him, which pulls him out of his self-indulgent depression and even gets him to his feet.

While the daughters are dealing with their personal crises, their mother is struggling with a memory she cannot quite put together. She has a key that she is certain opens something important, but she cannot remember why it is important. In a rare moment of clarity, Lovie remembers where a lock box is hidden. The key reveals money that is vital to ensuring that the family's seafood market survives. Jackie lends a helping hand to Faith while taking a leap that she hopes will help her find happiness in her own life.

More summaries and resources for teaching or studying Her Sister's Shoes.