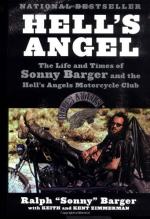 Plot Summary
+Chapters Summary and Analysis
Chapter 1: Muster to Custer
Chapter 2: Blue-Collar Oakland, Jungle Jim's, and Ralph The Lumper
Chapter 3: Sleeping in the Snake Pit
Chapter 4: Harleys, Choppers, Full Dressers, and Stolen Wheels
Chapter 5: The Proud, the (Filthy) Few. . . The Hell's Angels
Chapter 6: Old Ladies, Main Squeezes, and the Maid of Livermore
Chapter 7: The Sizzling, Acid-Drenched Sixties
Chapter 8: Running through the Jungle, Porterville, and Shooting Pool with an Automatic
Chapter 9: Let It Bleed: No Sympathy for the Devils of Altamont
Chapter 10: Murder, Mayhem, Living Outside the Law
Chapter 11: Locked Up and Low Down - Angels on Ice
Chapter 12: RICO My Ass - the Law with the Funny Name
Chapter 13: Rats, Infil-traitors and Government Informants
Chapter 14: Taz Kicks the Big C
Chapter 15: Oakland in My Rearview Mirror, Carefree Highway through my Windshield
Characters
Objects/Places
Themes
Style
Quotes
Topics for Discussion
Order our Hell's Angel: The Life and Times of Sonny Barger and the Hell's Angels Motorcycle Club Study Guide

Sonny Barger
This Study Guide consists of approximately 31 pages of chapter summaries, quotes, character analysis, themes, and more - everything you need to sharpen your knowledge of Hell's Angel.

Hell's Angel: The Life and Times of Sonny Barger and the Hell's Angels Motorcycle Club Summary & Study Guide includes comprehensive information and analysis to help you understand the book. This study guide contains the following sections:

This detailed literature summary also contains Topics for Discussion on Hell's Angel: The Life and Times of Sonny Barger and the Hell's Angels Motorcycle Club by Sonny Barger.

"Hell's Angel - The Life and Times of Sonny Barger and the Hell's Angels Motorcycle Club" by Ralph "Sonny" Barger is the story of the founding of the Hell's Angels Motorcycle Club. The author, Sonny Barger, is one of the early founders of the club. Sonny was born in central California to Ralph, Sr., a "lumper" or a laborer who loads and unloads trucks and ships and to Kathryn. Kathryn left her husband, daughter Shirley, and Sonny when he was just four months old. Sonny never saw his mother again.

The family had a rough time and eventually relocated to Oakland, California. Ralph didn't make much money although his jobs often took him away from home for long periods of time. He was a functioning alcoholic, which created additional suffering for the young children. The family lived with Ralph's mother until she died when Sonny was eight years old. Ralph married another woman named Sylvia. They had Sonny's half-sister, Virginia. But Sylvia only stayed around four years and one day was gone, taking Virginia and everything that wasn't nailed down with her.

Sonny and his older sister were pretty much on their own after Sylvia left and their grandmother died. When Ralph was home, he was usually drunk or at the bar and paid little attention to his children. Sonny hated school and as the years passed, he tended to hang with the ruffians at school. When he was very young, he organized a club that was dubbed, "Earth Angels," a predecessor of a club he would later help form as an adult.

As a young teenager, Sonny got into his first scrapes with the law. He was arrested for DUI several times. His violations soon escalated to drug and assault charges. At sixteen, he found himself without a real home. He forged his birth certificate and joined the army. After serving fourteen months, his real age was exposed and he was forced to leave the army although he was given an honorable discharge. He returned to Oakland where he became interested in motorcycles. He associated with other young men, many of whom were military veterans who also loved motorcycles and the free spirit they felt that riding gave them.

The phrase "Hell's Angels" was popular in the military since World War I when a fighter squadron acquired the name. Through the years, the name was used for various military craft. Sonny helped to form the Oakland chapter of the Hell's Angels not knowing that there were several such organizations already forming in other areas of California. For many years, the club was strictly limited to California chapters but eventually clubs were allowed to form in other cities and even in other countries. However, the control and oversight of the organization as a whole was maintained in California.

The men who joined the Angels considered themselves patriotic and defenders of the first amendment. They displayed a loyalty to each other and their clubs. As the years went on, they began to gain a reputation for partying, fighting, drugging, drinking, free se,x and eventually criminal activities. Although they had strict rules about their behavior within their chapter and with other Hell's Angels chapters, they were very open when it came to outsiders. The Angels were a menacing and rowdy group who loved to get into fights and beat the living daylights out of their enemies, which could be anyone from a cop who was attempting to arrest them or someone who just looked at them the wrong way.

Law enforcement dogged the group from the early days of the club. The Angels learned to work around a lot of the laws which compelled the feds to charge them with federal RICO laws which incriminated an individual who was associated with any outlaw organization.

Sonny Barger had a leadership role in the Angels throughout his life. He was in and out of jail during most of those years. His first wife died when she tried to self-abort her baby. His second wife had a speed addiction. They split up when she realized that she'd never lose her drug problem while married to Sonny. He married a third time and had a daughter. After thirty-five years of smoking Camels, Barger was diagnosed with throat cancer. He survived however. Barger and the other dedicated Angels had a life-long love affair with their motorcycles and the freedom and identity that it gave them.

More summaries and resources for teaching or studying Hell's Angel: The Life and Times of Sonny Barger and the Hell's Angels Motorcycle Club.

Hell's Angel: The Life and Times of Sonny Barger and the Hell's Angels Motorcycle Club from BookRags. (c)2022 BookRags, Inc. All rights reserved.