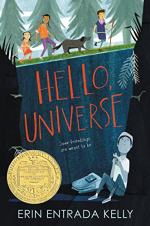 Erin Entrada Kelly
This Study Guide consists of approximately 56 pages of chapter summaries, quotes, character analysis, themes, and more - everything you need to sharpen your knowledge of Hello, Universe.

At the start of the narrative, both Virgil and Valencia have problems. Virgil is extremely shy and feels like a failure. He likes Valencia, but he is afraid to approach her. Valencia, who is deaf, fears that she is going to be alone for the rest of her life. Virgil and Valencia go to Kaori, a self-proclaimed psychic, for help.

During Virgil’s first appointment with the psychic, she tells him that she sees him in a dark place. This worries Virgil because he is afraid of the dark. When he tells her that he also likes a girl, but is afraid to talk to her, Kaori tells him to bring five stones when he comes to his next appointment. Virgil does not tell her that the name of the girl he likes is Valencia, but he does give her Valencia’s initials.

Valencia makes an appointment with Kaori after seeing her business card in the grocery store. She does not know whether she can trust Kaori, so she tells her that her name is Renee.

As it turns out, Valencia and Virgil have appointments on the same day. Virgil, however, does not make it to his appointment because Chet, a boy who bullies Virgil, intercepts him in the woods as Virgil is walking to Kaori’s house. Chet is in the woods looking for a snake to capture. Chet harasses Virgil and takes Virgil’s backpack and tosses it in a well. Unbeknown to Chet, Virgil’s guinea pig, Gulliver, is in the backpack. So, after Chet leaves, Virgil puts the stones he collected for his appointment with Kaori on the side of the well and climbs into it to rescue Gulliver. As he descends the ladder leading to the bottom of the well, he sees his backpack. The bottom steps of the ladder are missing so Virgil has to jump into the well in order to reach his bag. He cannot climb out of the well, however, because he is unable to reach the lowest rungs of the ladder.

In the meantime, Virgil’s absence worries Kaori because Virgil is always on time. She is still worried about him when Valencia arrives for her appointment. Kaori correctly diagnoses that Valencia is afraid of being alone. Valencia’s protests makes Kaori share her worries about Virgil. Kaori and Gen (Kaori's sister )do not know that Valencia is the girl Virgil likes. They ask Valencia whether she saw him on the way to her appointment. She says she did not, but she will help them look for him. On her way to Kaori’s house, Valencia did see the stones that Virgil placed on the side of the well and the fact that the well was uncovered. She had tossed the stones in the well and covered it. She did not hear Virgil and she does not know the significance of what she saw. So, she does not mention it to Kaori.

They check Virgil’s home first to make sure he is really missing. When they find out that he is not there, they go into the woods to perform a ceremony to find lost things. While they are in the woods, they run into Chet who found the snake he was looking for, but lost it when it bit him. He thinks that it was poisonous and he is dying. Valencia knows a lot about snakes and assures him that he is not dying and sends him home. Seeing him there makes her remember the stones she saw on the side of the well. She has already learned that Virgil was supposed to bring stones to Kaori. She puts the pieces of what she knows together and realizes that Virgil is in the well. Kaori and Gen now know Valencia’s real name and realize that she is the girl Virgil likes. The girls go to the well and rescue Virgil.

During his time in the well, Virgil thinks of goals he wants to achieve. He wants to stand up to Chet, tell his mother to stop calling him Turtle, and talk to Valencia. By the end of the narrative, he achieves them all. In addition, Valencia no longer worries about being alone as she now has Kaori and Virgil as friends. Kaori has expanded her business opportunities by partnering with Valencia.

More summaries and resources for teaching or studying Hello, Universe.